One of the ways Intel is going to make its upcoming Tiger Lake processors purr is with an upgrade in graphics performance. Tiger Lake will debut with Intel's Xe graphics architecture in tow, which Intel promises will deliver a "huge leap" in performance, while perhaps giving us a taste of bigger things to come in the discrete space. While we wait for Tiger Lake, some leaked benchmarks have emerged.
More accurately, more leaked benchmarks have found their way to the web. There have been a bunch of Tiger Lake and Xe graphics leaks already, some more promising than others. These latest unofficial benchmarks fall decidedly into the "promising" category, as they seemingly show Tiger Lake trouncing current-gen products.
The more modest of the two leaks comes by way of Twitter user @_rogame, who spotted a Tiger Lake in the 3DMark Fire Strike database.

As @_rogame relays the information, the Tiger Lake entry sports Xe graphics with 96 execution units (EUs) and has a 28W TDP. According to the leaked data, it scored 4,514 in the Fire Strike benchmark, compared to 3,241 for the Core i7-1065G7 at 25W and 2,600 at around 15W. It also outpaced AMD's latest generation Ryzen 4000U series by a decent margin across the board.
In a separate leak, the folks at Notebookcheck say they obtained "exclusive benchmark results" comparing the onboard Xe graphics in several different Tiger Lake-U processors to their Ice Lake counterparts.
Here's a look... 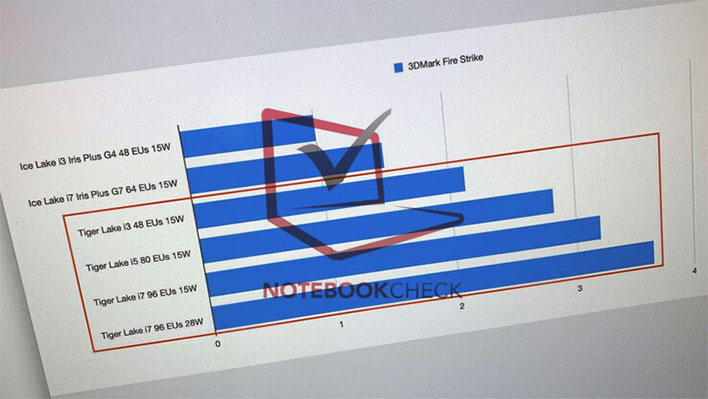 This is another round of 3DMark Fire Strike benchmarks, but with more Tiger Lake configurations added to the mix. Perhaps what is most interesting is that even the Core i3 variant with 48 EUs shows around a 20 percent performance uptick compared to a Core i7 Ice Lake processor with 64 EUs, both at 15W. That is nothing short of impressive, if it's true.

The version with 96 EUs at 15W blows the top off Ice Lake, and at 25W, it becomes a runaway. What this all boils down to, according to the site, is around a 50 percent improvement in performance per EU in Tiger Lake.
Whether things actually play out this way remains to be seen, If so, it also bodes well for Intel's efforts in the discrete GPU space, though the competition will be markedly stiffer with Ampere and RDNA 2 on the horizon.