Acer's Predator series of gaming displays is one of the longest-running lines of high-refresh monitors with G-Sync in the PC industry. The newest X32 and X32 FP entries really push the bar on what a gaming monitor can be with some pretty impressive HDR specifications that we don't find too often in gaming monitors along with high resolutions and refresh rates to help gamers get the most out of recent games in something a little smaller than its 43-inch monster CG437K.

Both monitors in the X32 series boast IPS displays and Ultra HD 3840x2160 resolutions with one-millisecond response times, and as their name suggests they have 32" display panels. The differences appear in their refresh rates. The standard X32 can push 2160p at 120Hz in standard mode via its three HDMI 2.0 ports, and can reach 160Hz via DisplayPort 1.4. Meanwhile, the X32 FP breaks down the connectivity barrier with four HDMI 2.1 ports, which allows the monitor to hit 160Hz with either connection type, and also features a USB-C port with 90 watts of USB Power Delivery. The X32 FP also has an overclocking mode that allows a small bump to 165Hz.


Whichever X32 buyers choose, those IPS panels are backlit by an impressive 576-zone mini LED array that can hit a whopping 1,000 nits of sustained brightness with local dimming, and have peak brightness levels of up to 1,200 nits. That's good enough for HDR-1000 certification and quite a rarity for a gaming monitor in that size class.
Both monitors also have 8-bit panels with 16.7 million colors and cover 99% of the Adobe sRGB color gamut. Acer further points out that the Predator X32 earned a CES Innovation Award in the Computer Peripherals & Accessories category. Pricing on these monitors starts at $1,799 for the X32 FP, which will be available in the second quarter of 2022, and $1,999 for the X32, which should hit in the third quarter this year. There's time to start saving. 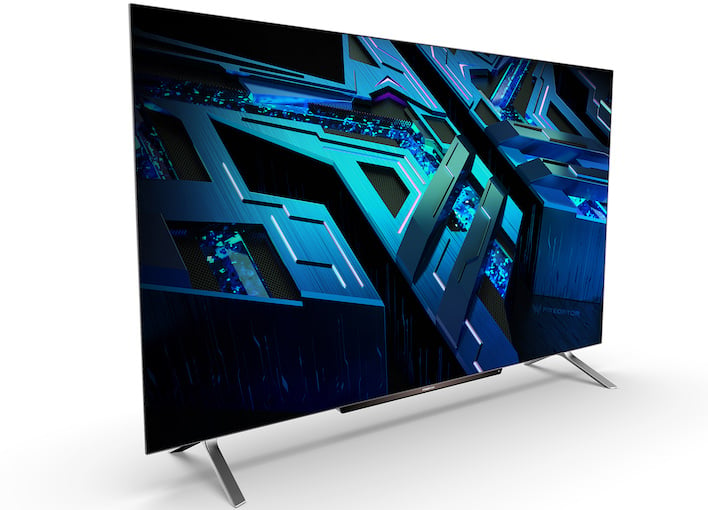 On the other hand, if you do want something a bit larger, the 48-inch CG48 might as well be a television but is classified as a monitor. This large-format display has the same 2160p resolution as the X32 lineup, but has an OLED screen rather than an IPS panel. Thanks to its OLED setup, the contrast ratio is through the roof with true blacks, though only a maximum brightness of 450 nits. Sill, it covers 98% of the DCI-P3 color space and features a 138Hz refresh rate. A big 48" OLED display with a high refresh rate won't come cheap, but those who shell out $2,499 when this display launches in Q3 will likely find it looks awfully nice. 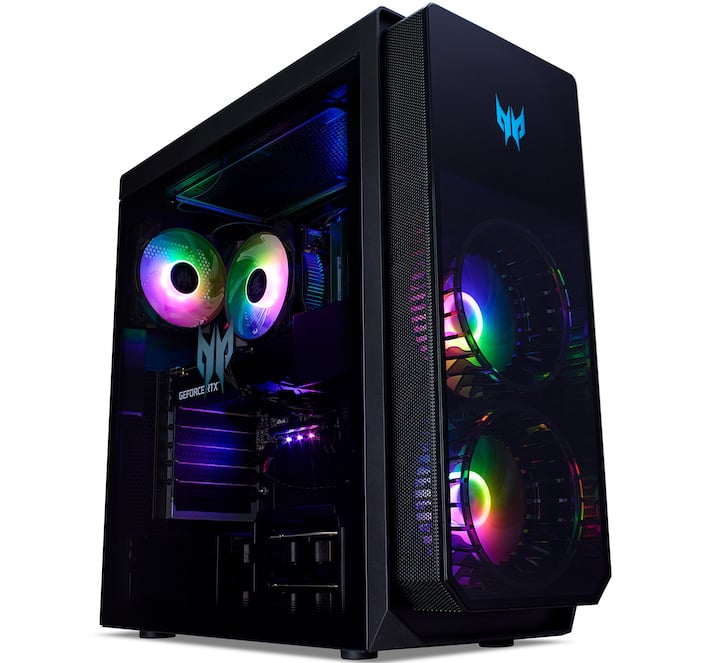 Those monitors need something fast to drive them, and if the GPU shortage and the mere existence of huge crypto farms have you down, Acer's Orion 3000 and 5000 lineup of desktops should fit the bill. The updated lineup uses Intel's 12th-generation Core processors across the board, which in our testing has proven to be some of the best gaming CPUs around right now, and GeForce RTX graphics cards. Both use tinted glass and RGB lighting to good effect.

The Orion 3000 is a mid-sized tower, while the Orion 5000 has a larger full-sized tower enclosure, and each has slightly different specs befitting of their sizes and price points. The Orion 5000 has up to a Core i7 processor, GeForce RTX 3080 graphics, and a maximum of 64GB DDR5-4000 memory with a starting price of $2,499. Meanwhile, the Orion 3000 won't be slow at all, with its own Core i7 processor, GeForce RTX 3070 graphics, and a top-end DDR4-3200 capacity of 64 GB. Pricing on this model starts at $1,999. Both systems will be available in March. If these aren't powerful or large enough for you, Acer's Orion 7000 series should hit right around the same time.