If you’ve been maddened by the difficulty buying a new GPU, this may make it worse. One full-time cryptocurrency miner has offered a peek into his mining server farm, and it’s made up almost entirely of Nvidia GeForce RTX 3070 GPUs.


Jaxson Davidson has offered a glimpse into “building 1/4” of his mining farm. In that building, Davidson says, his mining servers use RTX 3070 cards almost exclusively. The Utah-based miner explained that he purchased the GPUs from various small businesses around his county. 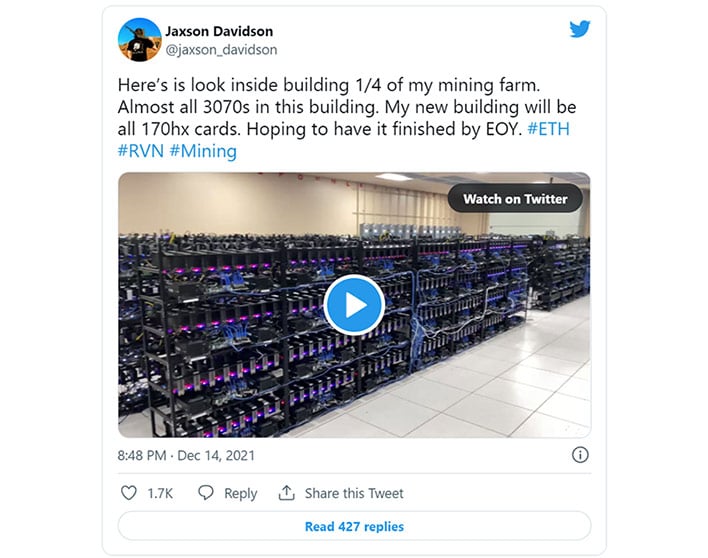 NVIDIA recently released a refreshed RTX 2060 card with 12GB of GDDR6 memory, but good luck finding that one, either. The last-generation card, lacking a hash rate limiter, makes an excellent mining card. In fact, it’s significantly better than the RTX 2060 Davidson uses.

This comes at a time when gamers and graphics designers struggle to source new graphics cards for their rigs. Even though AMD insists cryptocurrency mining doesn’t have a meaningful impact on The Great GPU Shortage of 2021, try convincing consumers of that.

Nvidia has a number of rumored launches coming, but will that help when crypto miners continue snagging up whatever they can find? In Davidson’s case, the full-time crypto miner won’t be competing for the upcoming refreshed RTX 3080 or RTX 3090 Ti. As things stand now, the easiest way to use a RTX 3080 is through the GeForce NOW streaming service.

He reports that he’s penned a deal directly with NVIDIA to equip his next building with the as-yet unannounced CMP (Crypto Mining Processor) 170HX. That product is designed specifically for mining cryptocurrency, and it took Davidson more than a month to secure his deal apparently.

If more crypto miners follow Davidson’s lead and adopt CMP cards, it could help ease the crunch of trying to find a GPU for gaming rigs. NVDIA has said it is using chips that were rejected for consumer use o n its CMP cards, but work fine in the headless units dedicated to crypto mining.