Intel recently teased what its first Arc Alchemist graphics card will look like, and to our eyes, it's a beautiful design. We can also expect Intel's hardware partners to do their own thing with custom coolers and probably factory overclocks, but as far as the reference "Limited Edition" shroud goes, it looks pretty sharp. How will these cards perform, though? We'll find out in time, and as we wait, expect benchmark leaks to emerge.
It's already happening, and has been for a little bit now. The latest one, however, purportedly reflects a benchmark run obtained with an Intel Arc Alchemist A770 graphics card. Check it out... 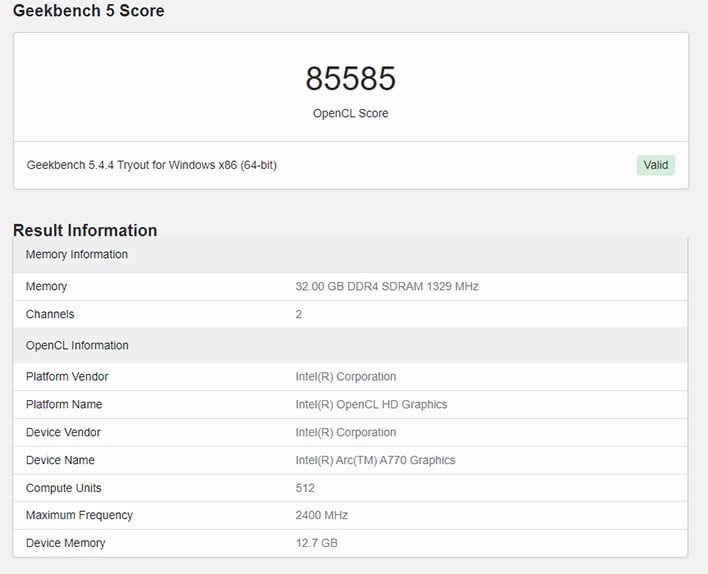 We've cropped and rearranged the screenshot for easier viewing (the system is sporting a Core i5-9600K processor and 32GB of DDR4-2666 RAM, if you're curious), but not any of the details of course. According to the database entry, the A770 flexes 512 Xe vector engines (listed as compute units), 12.7GB of memory, and a 2.4GHz clock speed.
The wonky memory reading likely reflects 16GB of actual video memory, and of the GDDR6 variety. As for the clock speed, that's probably an accurate reading though whether it not it represents the final specification remains to be seen. This is essentially the desktop version of Intel's mobile A770M, which features 32 Xe cores, 32 ray tracing units, 16GB of GDDR6 tied to a 256-bit memory bus, and a 1,650MHz clock speed.
Standard disclaimer applies when it come to leaks—they may or may not be accurate, including both the specs and performance. This is almost definitely an engineering sample, after all, and on early drivers.
That said, it posted an OpenCL score of 85,585. Here's how that slots into Geekbench's collection of average scores for other cards...
A score of 85,585 is pretty low compared to the competition, but given that this is an early leak, it's not cause of concern. Driver tweaks and other optimizations could and should result in a significantly better showing when the A770 materializes, or so we hope.
Speaking of which, the first Arc Alchemist desktop graphics cards are expected to ship this summer.