Pixel Buds 2 - Like Having A Google Home In Your Ears 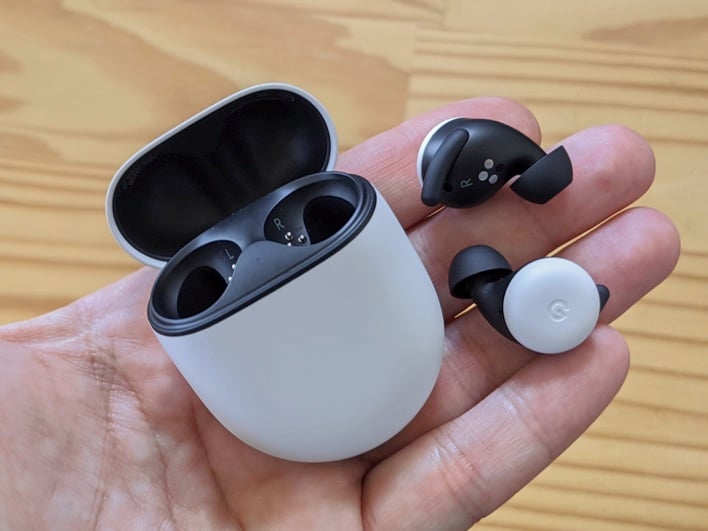 True wireless earbuds are all the rage these days, and with many phones lacking a headphone jack, it’s really no surprise. You can mostly blame Apple for the missing port, but you can also thank them for giving the entire industry a reason to copy the AirPods. And Google is finally in the game. See, the first Pixel Buds, which were neckbuds, were a bust back in 2017. So, we were pretty excited when Google announced these new, true wireless earbuds last October. And in terms of first impressions, the $180 Pixel Buds 2 deliver.

Picture an egg. Now imagine you can somehow flatten this egg a little without cracking it. That’s what the charging case for Google’s new Pixel Buds looks and feels like -- a slightly flattened egg. It’s uncanny how the surface color and texture match that of an egg. But this goes beyond good materials and build quality. It’s all in the details. The case’s charging status LED, normally hidden, glows through the plastic surface in front when lit. Even the pairing button, located around the back, is easy to miss because it’s completely flush.
The attention to detail continues with the case’s USB Type-C connector opening, which actually follows the subtle contour of the bottom edge. Pop the lid open, and there’s another LED inside -- this one showing the earbuds’ charging status. Magnets hold the Pixel Buds 2 firmly against pogo pins while charging, so you don’t have to worry about dropping an earbud when the case is open. And the sensory experience of opening and closing the lid is exquisite. It’s like a fancy fidget toy for storing earbuds. Oh, and it supports Qi wireless charging too. 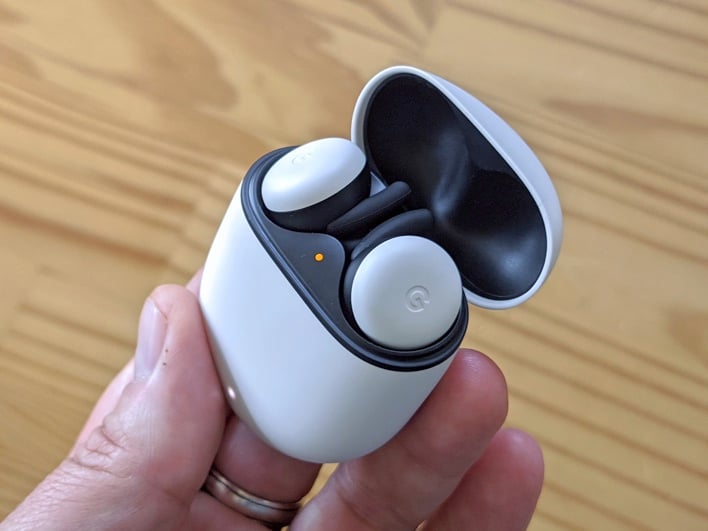 While the Pixel Buds 2 charging case is a design masterpiece, we’re less enamored with the earbuds. Picture hemispheres with a protruding stem. The flat side consists of the same eggshell-like material as the case, features an embossed “G” logo, and comes in four colors. The stem side uses the same black plastic found inside the case. In addition to the removable silicone tips (3 sizes provided), the new Pixel Buds have these annoying little silicone “horns” designed to keep them seated in your ears. Unfortunately, these can’t be removed.

Unfortunately, comfort isn’t the new Pixel Buds’ strong suit. We found them tiring to wear for longer than 2-3 hours. Those aforementioned “horns” don’t seem to do anything but get in the way -- making these already slightly large earbuds even bulkier and more difficult to insert. On the plus side, and unlike many other sealed earbuds, Google’s added a small port to equalize the air pressure inside the ear canal. Somehow, this doesn’t negatively impact the Pixel Buds 2’s passive noise isolation, which is fine. Obviously, there’s no active noise cancelling here.


When it comes to sound quality, we prefer a very neutral presentation, with a lot of detail and precise imaging. This is at odds with the majority of modern earbuds and headphones, which tend to emphasize bass, often by popular demand. Our reference headphones are $150 BeyerDynamic DT990 PRO (250 Ohm) and our preferred earbuds are $290 Etymotic Research ER 4SR in-ear monitors (IEMs) with custom ear molds. We also enjoy the Sennheiser HD 600, Sony WH-1000XM3, plus select Westone, Shure, Grado, and AKG products. 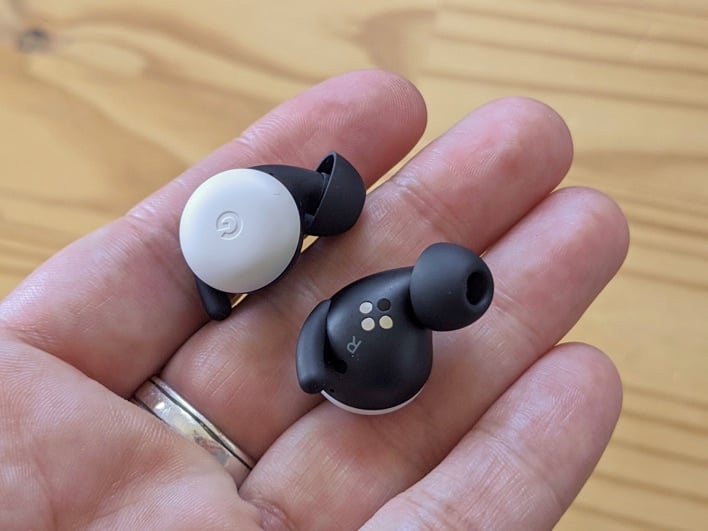 We were pleasantly surprised with the new Pixel Buds’s audio delivery. Simply put, they sound great. If you want extra bass, go elsewhere -- these are not the earbuds you’re looking for. What you’ll get instead is a flat frequency response, nice balance, clean bass, and a decent stereo image. If anything, we wish the mids/highs were a little more detailed and the earbuds were less noisy. Strangely, there’s a faint hiss in the background, mostly noticeable at low volumes and between songs. It’s not a dealbreaker, just unexpected at this price point.

Voice calls also sound pretty good on the Pixel Buds 2, with clear audio on both ends. When asked, one of our callers reported decent noise cancellation after we walked past a loud construction site. The only issue we initially experienced was with connectivity. Calls were problem free, but listening to music sometimes exhibited random dropouts from one or both earbuds. We reached out to Google, and they’re still investigating, but the problem is all but completely gone since doing a factory reset on the earbuds.

Setup is a breeze. If you have a recent Android phone, just make sure Bluetooth is enabled and open the case’s lid near your handset. A notification will pop up -- tap on it and you’re all paired up. If you’re using a recent Pixel phone, you’re all set. Otherwise, you’ll be prompted to install the Google Pixel Buds app from the Google Play Store. Finally, you’ll be asked to configure Google Assistant. Of course, you can also pair the new Pixel Buds with any iPhone -- just don’t expect any functionality beyond basic media and call support.

Now, let’s talk about features and Google Assistant, because that’s where the Pixel Buds 2 really shine. Basically, they do everything you’d expect from modern true wireless earbuds, except active noise cancelling and aptX audio. Both earbuds are touch sensitive. Tap once to play, pause, answer calls, or hangup. Swipe forward to raise the volume; backwards to lower the volume. Double tap for next track; triple tap for previous track. Tap and hold for Google Assistant or to hear notifications. This works with either earbud but can’t be disabled.
Like the original Pixel Buds and other earbuds that integrate with Google Assistant, the new Pixel Buds can read notifications out loud, and lets you dictate replies. They also integrate with Google Translate for real-time audio translation. Just say “hey Google, help me speak Spanish” and the Assistant starts the Translate app. You can then tap and hold either earbud to speak in English, and the app will translate what you say in Spanish. A button in the app enables responses in Spanish, and you hear the English translation through the earbuds.
But where the new Pixel Buds truly set themselves apart from any other true wireless earbuds is that Google Assistant is always listening. It’s like having a Google Home speaker right in your ears. Obviously, that’s both magical and scary, depending on where you stand on “always listening” devices. We’re on board, and frankly the experience is totally awesome. Other features include in-ear detection and Adaptive Sound, a setting which automatically optimizes the volume based on the amount of ambient noise.

Google claims the Pixel Buds 2 should last up to 5 hours before needing a refill -- and up to 24 hours with the case. That’s not spectacular -- about the same as Apple’s AirPods -- but not in the same league as Samsung’s Galaxy Buds+ (11 hours). In our tests, we managed to listen to music for about 3 hours before hearing the low battery chime. At that point the left earbud was at 18% and the right at 38%. We’d made a one minute phone call, used Google Assistant a couple times, and left the earbuds idle and out of the case for about 30 minutes.


While battery life isn’t great, you have to keep in mind that Google Assistant is always listening, and there are at least three refills available in the case when it’s fully charged. Without active noise cancelling, and with Google Assistant needing an internet connection, it's pretty clear the new Pixel Buds are aimed at commuters rather than travellers. We’d like to see a setting to turn the “always listening” feature off -- maybe even automatically when the connected handset is switched to airplane mode -- to save battery life. 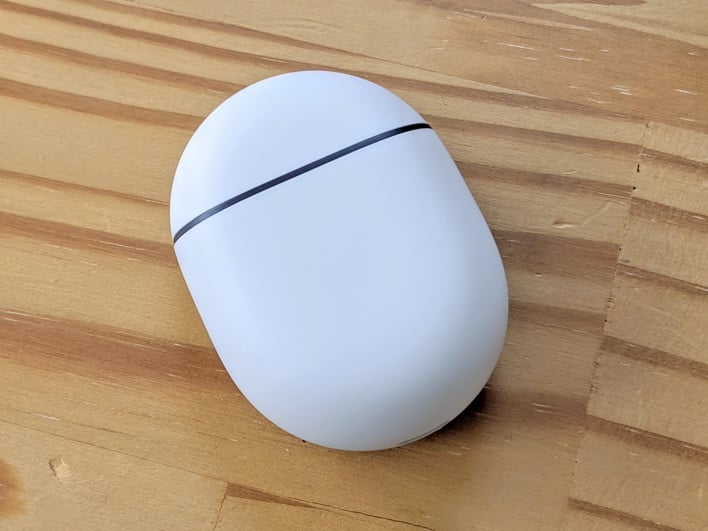 Overall, Google’s done a really nice job with the new Pixel Buds. They offer good design, great sound quality, and seamless Google Assistant integration, plus easy setup and decent noise isolation. Comfort and battery life could be improved, and they lack active noise cancelling. Still, like Google’s other devices, the Pixel Buds 2 blend the company’s hardware, software, and services in an effortless, delightful, and uniquely Google-y way. That’s no small feat. And if that’s what you’re looking for, then there’s nothing quite like the new Pixel Buds.