Kingston DC1000M: CrystalDiskMark, Latency Under Load, And The Verdict 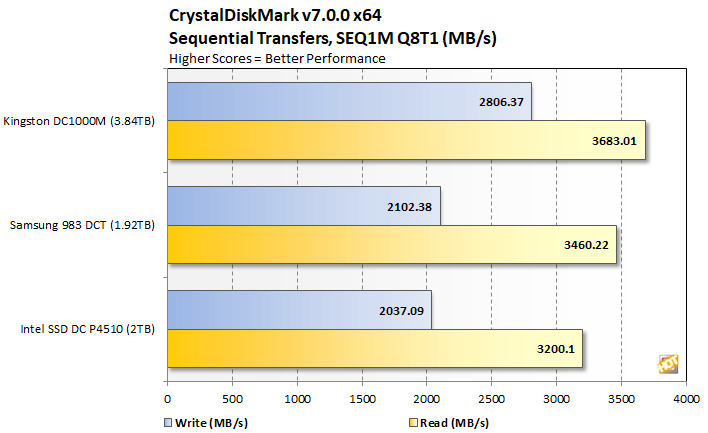 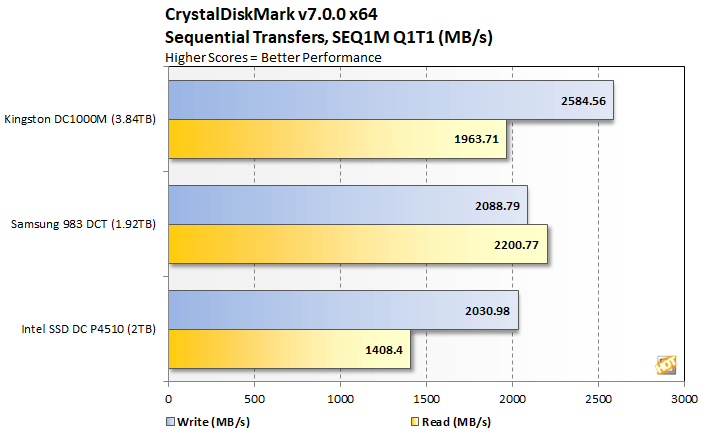 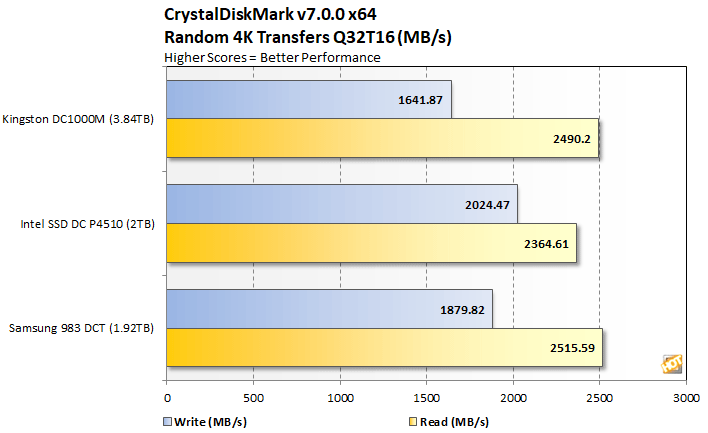 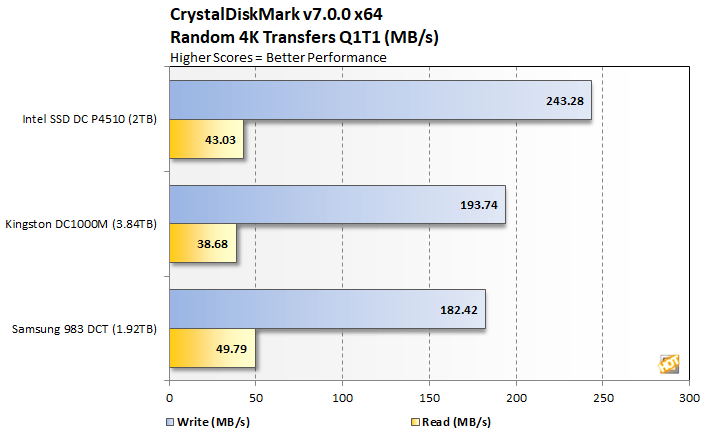 The Kingston DC1000M offered strong sequential performance, outpacing both the Intel and Samsung drives at both queue depths in the write portion of the tests. The Samsung 983 DCT, however, pulled ahead in the read test at QD1. In the random 4K transfer tests, the Kingston drive led the pack in reads at QD32, but ends up finishing in the middle of the pack in the QD1 test. 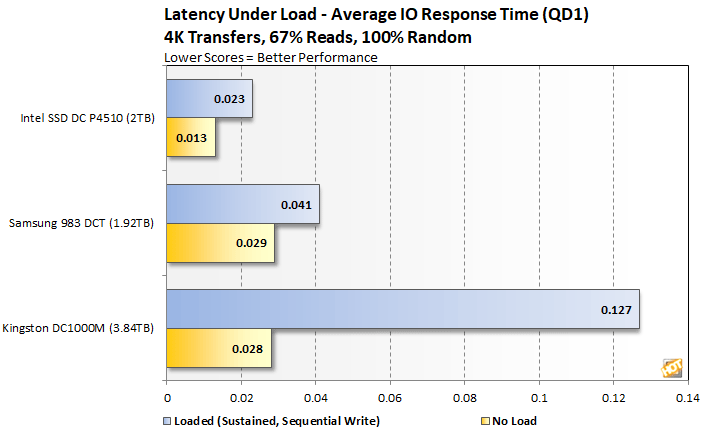 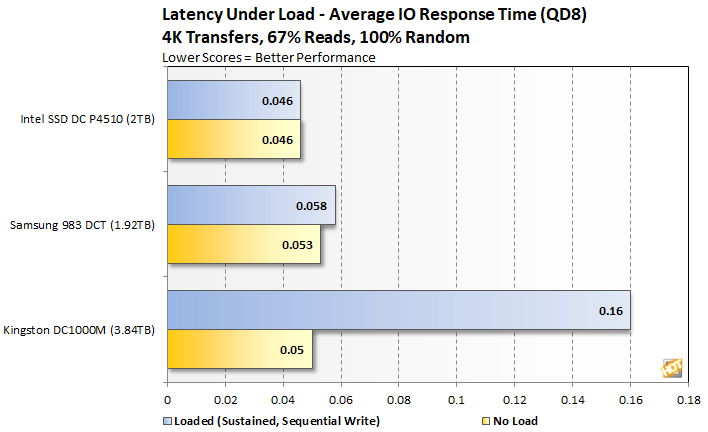 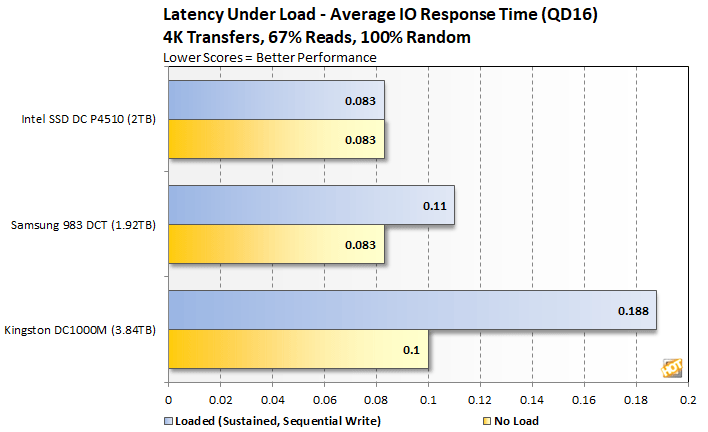 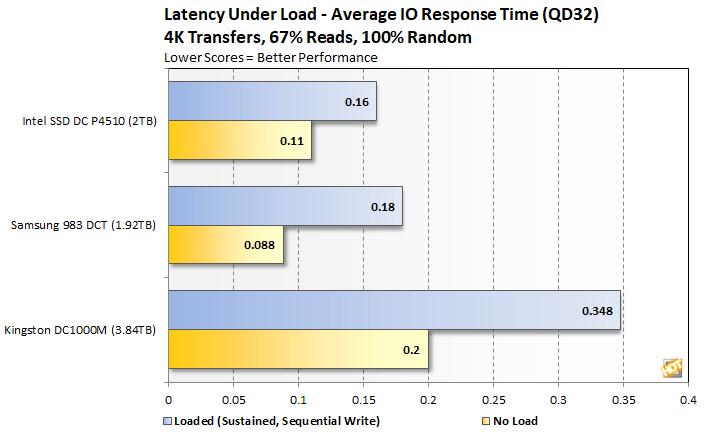 While under load, access latency increases nearly across the board with all drives and at every queue depth, but the Kingston drive's performance took the largest hits overall. Access latency is still low relatively to legacy interfaces / drives, but versus the Samsung and Intel NVMe drives we tested, the DC1000M ends up falling behind a bit.

Kingston rates the 3.84TB DC1000M drive we tested for up to 3.1GB/s reads with up to 2.7GB/s writes. In our testing, the drive actually exceeded those numbers on more than one occasion, which resulted in clear wins on a couple of the sequential-focused benchmarks (like ATTO, SANDRA, and CrystalDiskMark). Random 4K transfers fall about in the middle of the pack versus the particular Samsung and Intel drives we tested, but were typically stronger in terms of writes. 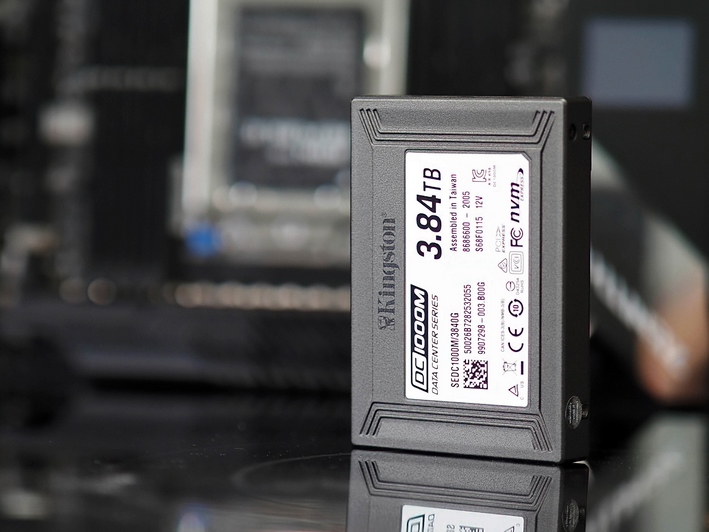 Kingston DC1000M series drives are currently on-sale for about $0.26 per gigabyte (the 3.84TB model we tested can be found for $1,062 at the moment). That makes the Kingston drive's price somewhat higher than the Samsung and Intel drives we tested, which are available for about $0.21 and $0.23, respectively. General availability of the Kingston DC1000M drives is still ramping up, however, so we expect pricing to trickle south over the coming weeks. Looking back through the numbers though, the drives seem best suited to heavier sequential transfers at higher queue depths, where it typically led the Intel and Samsung drives. Although we don't have any of the data graphed, the NVMe-based Kingston DC1000M drives are a significant, across-the-board upgrade over legacy SATA-based solutions.

If you're in need of high-capacity, enterprise-class solid state storage, with full power loss protection and a solid warranty, the Kingston DC1000M series is worth a look, especially if your workloads are aligned with its particular strengths.