For a CPU series as close to launch as the Ryzen 7000 series supposedly is, we've seen scant few leaked benchmarks. We saw a couple of leaks for the six-core Ryzen 5 7600X model, and we also saw a Geekbench result for the Zen 4-based EPYC "Genoa" processor, but our first leaked benchmark result for the Ryzen 7 7700X comes today courtesy of Bilibili hardware guy Extreme Player, who shared a Cinebench R20 result. 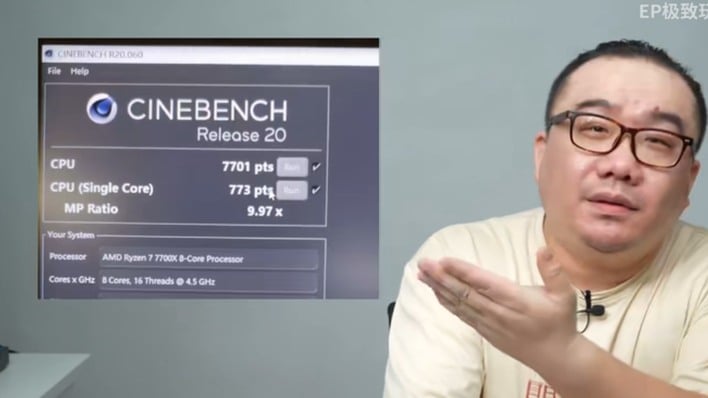 Extreme Player is usually more known for Intel-related leaks, but we've got no real reason to doubt the veracity of this benchmark. Shown briefly on screen in his latest video, Extreme Player's benchmark run puts the Ryzen 7 7700X down for a Cinebench R20 score of 773 on a single core, and an overall score of 7701. That gives it an MP ratio of 9.97x—not too bad for an 8-core CPU.

Cinebench R20 being the first leaked result is a little poetic, as it was one of the first leaked benchmarks we saw for the Ryzen 5000 series, too. In fact, our Ryzen 9 5900X and 5950X review was one of our last reviews to still use the previous version of Cinebench.

It's not quite an apples-to-apples comparison, but if we look at the Ryzen 9 5900X numbers from that review alongside the leaked numbers for the Ryzen 7 7700X, we see a 24% uplift in single-threaded performance and just a 6% deficit in multi-threaded performance. That's fantastic considering we're comparing an eight-core CPU to a twelve-core CPU.

We don't have Cinebench R20 numbers for a Ryzen 7 5800X on hand, unfortunately. If we glance at CPU-Monkey's charts, we come up with values of 628 for single-core and 5724 for multi-core, yielding a 9.11x MP ratio. That puts the current-generation part behind its successor by 23% in single-core and by just under 35% in multi-core.

Those are impressive generation-on-generation gains, even considering the die shrink AMD is benefitting from. We can attribute some of the boost to the next-gen part's high clock rates. The Cinebench screenshot shows a base clock of 4.5 GHz, which lines up with the clock rate data we've seen before. It's also possible that the use of DDR5 memory and its associated high transfer rate is helping with multi-core performance here.

With that said, we should remark that these results don't put the Ryzen 7 7700X far ahead of Intel's current-generation parts. Going by CPU-Monkey's numbers again, the Core i5-12600K scores 6702 in a multi-threaded Cinebench R20 run, some 15% behind the unreleased Ryzen—but 741 points in a single-threaded test, less than 5% away from the Ryzen's score.

Cinebench is only one benchmark, and this is technically pre-release hardware. It's possible that this chip isn't boosting as high as final silicon, or there could be other issues with firmware or software. Whatever the case, we don't know for sure whether this is the performance folks can expect from AMD's next desktop Ryzen chips. We certainly wouldn't be disappointed if it were, though. We'll know more once the chips actually launch, likely next month.