Everyone is waiting with bated breath for the release of new hardware in the second half of this year. As we head into August and new CPUs and GPUs loom ever larger on the horizon, the leaks become more and more tantalizing. Today's leak regards one of AMD's upcoming Zen 4-based Ryzen 7000 processors. The processor in question has six cores and twelve threads. If UserBenchmark is to be believed, it has a base clock of 4.4 GHz, while the maximum boost frequency appears to be 4.95 GHz. That makes it very likely to be the Ryzen 5 7600X which was revealed yesterday. Its score reveals AMD may have been modest about the single-threaded performance of Zen 4.


While the name of the processor says "AMD Eng Sample", we suspect that this must be very close to retail silicon if it is hitting clocks like that. Then again, AMD already confirmed that Zen 4 will have peak boost frequencies of "5 GHz+", so maybe these are not final clocks after all.

Of course, the focus here is the benchmark result, which was spotted by APISAK. UserBenchmark produces an array of scores, and it is no surprise to see the 16-core, 24-thread Core i9-12900K come out ahead of the new Ryzen processor in multi-threaded processing. What is interesting is that the little Zen 4 chip demolishes Intel's finest in single-threaded performance, beating it by 22% according to UserBenchmark's reckoning.

This is a particularly impressive result not only because AMD's Ryzen processors have often trailed Intel's in single-threaded performance, but also because UserBenchmark is suspected to be slightly slanted against Ryzen. There is also the matter that UserBenchmark's data is obviously user-sourced, and the benchmark does not do much to control for overclocked or improperly-configured systems. It is not alone in this regard, of course—to be clear, we are not trying to call out UserBenchmark—but it is just another factor to be aware of when considering this data. 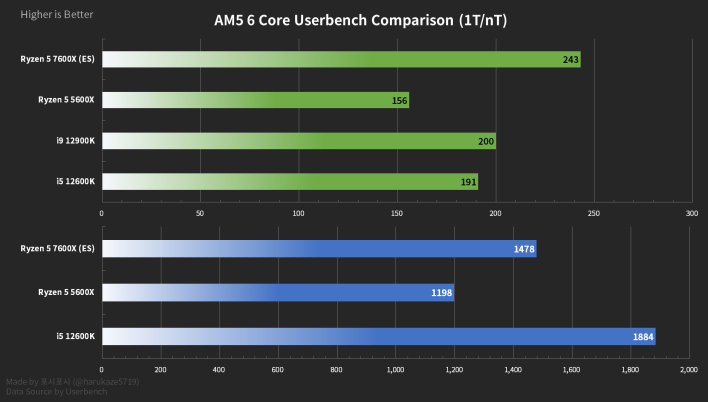 The chart above from @harukaze5719 pits the leaked Ryzen 5 7600X CPU against a few other processors in both single- and multi-threaded scores. Unsurprisingly the single-threaded result soars past everything, but that 56% gain, generation-on-generation, is really something mind-boggling.
Meanwhile, in the multi-threaded results, the 7600X is a solid step ahead of its current generation equivalent, the Ryzen 5 5600X, although we might have expected a higher result given the single-threaded comparison. The memory used was a kit of fast G.SKILL Trident Z DDR5 running at 5600 MT/s, so memory performance should not be a concern.

All in all, we do caution readers from reading too much into this singular result, but it is hard to not get excited about the possibility of a 55% jump in single-threaded performance. We will see if future leaks corroborate this data or if this is a freak outlier.