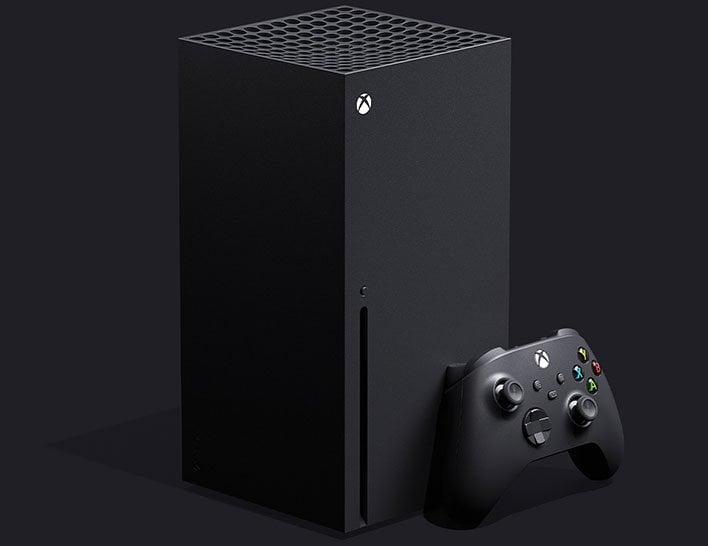 Yesterday, we got a glimpse at the Xbox Series X from the front and the back including its port lineup. Today, we're getting a clearer glimpse at the hardware actually inside the gaming console; specifically, with relation to its storage system. We had previously heard rumors that the Xbox Series X would feature a Phison SSD controller, and that has been seemingly confirmed thanks to a LinkedIn profile.

According to the software engineer's profile, the Xbox Series X makes use of the Phison PS5019-E19T, which is a DRAM-less SSD controller. It is PCIe 4.0 compliant controller that actually is a less performant counterpart to the familiar E16 controller. The E16 is capable of delivering throughput of up to 7GB/sec, however, the E19 can "only" deliver sustained reads and writes of 3.75GB/sec. Random reads/writes are rated for 440K IOPS and 500K IOPS respectively, while the controller supports up to 2TB capacities.

Considering that the 5400RPM hard drive used in the Xbox One is cranking out average read/write speeds of 100MB/sec, we'd consider this to be a significant upgrade for the storage subsystem. There has been a lot of talk about loading times "disappearing" with next-gen games, and these PCIe 4.0 SSDs will go a long way towards making the waiting game a thing of the past.

At this point, we don't know if the SSDs that Microsoft will use in the Xbox Series X will reach the maximum throughput possible with the E19 controller, but even if they don't, they'll still be significantly faster than HDDs used in the Xbox One family. However, it's unlikely that we'll see 2TB SKUs -- at least initially -- due to cost concerns. But we could easily see Microsoft making available 512GB and 1TB SKUs for gamers at launch.

For those not in the know, the Xbox Series X will be powered by an AMD Ryzen 3000 (Zen 2) processor and will pack in a Radeon Navi-based GPU to provide a massive performance boost over its predecessor.