Microsoft revealed a number of new details about its upcoming Xbox Series X console earlier this week, including "Quick Resume" functionality. According to Microsoft, Quick Resume allows you to hop back into gameplay in an instant from a suspended state. Quick Resume will suspend the state of multiple games, which is a big advantage over the current Xbox One family of consoles that can suspend gameplay for just one game.

Microsoft's Larry "Major Nelson" Hryb unleashed a bit more information on Quick Resume this week in a podcast. According to Major Nelson, the resumed state "survives a reboot", which is a great feature to have in the case of a system crash or system maintenance that could occur after you've left the battlefield. 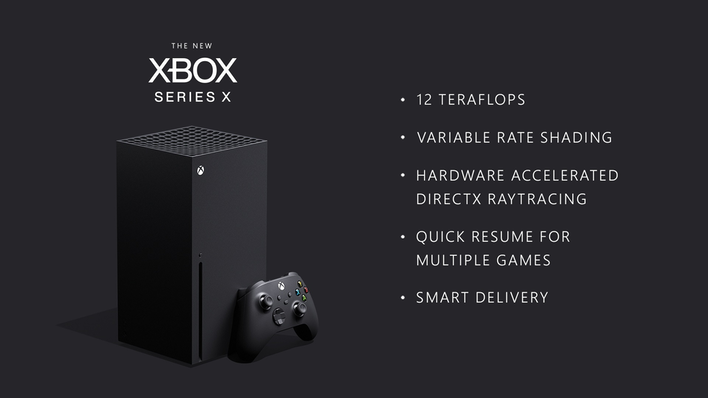 “I had to reboot because I had a system update, and then I went back to the game and went right back to it,” Major Nelson explained. However, it's still unknown how many games "multiple" constitutes, but we'd assume at least two.

During the podcast, Microsoft's Jason Ronald also talked up a feature called "audio ray tracing", which will be enabled thanks to the dedicated ray tracing hardware enabled in the system. “With the introduction of hardware accelerated ray tracing with the Xbox series X, we’re actually able to enable a whole new set of scenarios, whether that’s more realistic lighting, better reflections, we can even use it for things like spatial audio and have ray traced audio,” said Ronald.

The Xbox Series X is powered by an AMD Ryzen 3000-class processor and includes an AMD Radeon GPU based on RDNA 2 architecture. Microsoft revealed the GPU features 12 TFLOPs compute performance to steamroll through 4K games, and can even support 120 fps playback if developers choose to go that route.

Microsoft is planning to launch the Xbox Series X during the "Holiday 2020" shopping season -- that is if the Coronavirus doesn't sideline those plans.