Early in September, Microsoft announced the looming end of support for Adobe Flash Player in the Edge browser as we close out 2020 into 2021. We are now creeping toward the end of 2020, and Flash is finally beginning to get the boot. Microsoft has released an update to remove Adobe Flash from Windows and prevent future reinstalls.

Adobe Flash and Flash Player were once the rulers of the roost online. Content, games, ads, and more were all driven by Flash. It became incredibly popular and subsequently was targeted by malicious people. This made Flash a dangerous point of attack for millions of devices. As we wrote last month, “Couple that with poor performance on some machines, Adobe’s slowness to resolving security issues, and the rise of HMTL5, Flash has been relegated [mostly] to an afterthought with most modern browsers.” 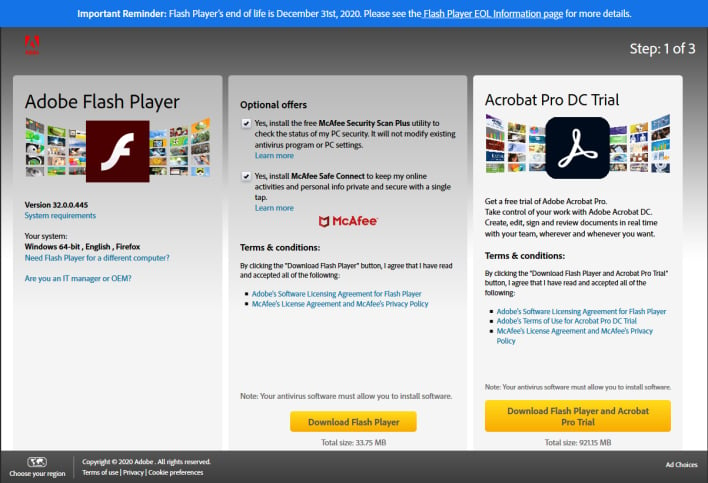 As it has become an afterthought, there is practically no need for Flash on modern systems. Thus, Microsoft is removing it with the optional update KB4577586. According to BleepingComputer, you can only pick up this update through the Microsoft Catalog, and “once installed, [it] cannot be removed afterward.” They explain that “Those who wish to install Adobe Flash Player on a device with this update have to reset the device to an earlier restore point or install a fresh copy of Windows 10.”

The folks at BleepingComputer found, however, that the built-in Flash with Windows was uninstalled, but browser-based Flash components remained. It is unknown why these parts remained, but they likely will not last when the update is pushed to all devices in 2021. Furthermore, hopefully, Microsoft will provide a proper program to execute Order 66 on Flash soon. It is time for Flash to go away.