Windows 10 Turns 5 Years Old: It's Growing Up But Still Sometimes Acts Like A Toddler 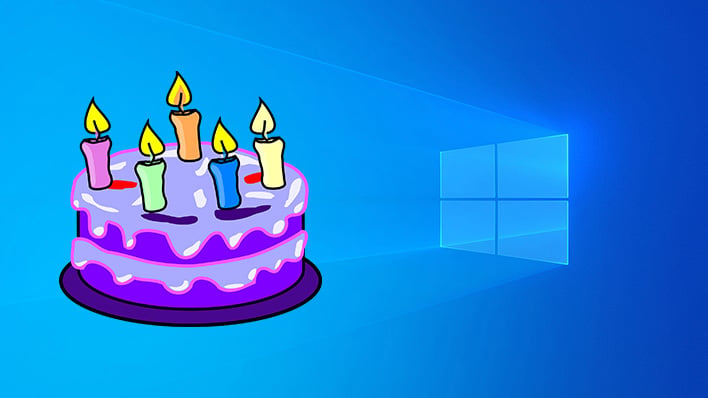 Certain events and milestones inevitably have you wondering where the hell time has gone. Windows 10 turning five years old today is one of them. Looking back, it has been somewhat of a tumultuous half-decade, both for Windows and in the real world. Some things are better, others perhaps not so much, depending on your viewpoint (again, both for Windows and the world around us).
Windows 10 came out on this day in 2015, the same year that Uptown Funk had reached No. 1. For the first year, Microsoft officially offered the OS as a free upgrade to Windows 7 and Windows 8 users, in pursuit of reaching a billion active devices within 2-3 years. Microsoft ultimately missed its goal, but did get there earlier this year (in March).
The biggest change Windows 10 introduced, though, is a move away from a monolithic release schedule to a Windows-as-a-service (WaaS) model, just without the ongoing subscription fee (for now, anyway—knock on wood). That's to say, barring a change in strategy, there will never be a Windows 11 or a Windows 2025, or whatever a subsequent release might be called.
Instead, Microsoft has committed to rolling out two major version upgrades every year, along with monthly security roundups (Patch Tuesday updates). These have been both a blessing a curse. They introduce new features and functionality, and keep Windows 10 looking and feeling fresh. But they also arrive with issues, some more than others.
The October 2018 Update was especially troublesome. So much so, in fact, that Microsoft ended up yanking it offline to stomp out several bugs, before re-releasing it to the public. The more recent May 2020 Update has also had its fair share of issues, like breaking OneDrive file syncing on some PCs. This is despite adopting a staggered roll out, rather than making these updates available to everyone at the same time.
Looking back over the past five years, one of the highlights is that Windows Defender (the built-in security in Windows 10) has grown into a capable antivirus program. I no longer feel compelled to rely on a third-party AV solution, whereas that was not the case in the days before Windows 10.
Microsoft has also grown to embrace Linux to some extent in Windows 10. The Windows Subsystem for Linux (WSL) has been a boon for people who use both Windows and Linux, and it is only getting better with time and polish.
In short, the look and feel of Windows 10 has changed since it was introduced, and will continue to do so going forward. Hopefully the next five years brings less hissy fits as Windows 10 continues to age and mature.