It is a good thing Microsoft opted to slow play the roll out of its May 2020 Update (build 2004) for Windows 10, otherwise it could have ended up another train wreck, like the October 2018 Update (build 1809) that caused so many problems a couple of years ago. Adding to the growing list of problems with the latest feature upgrade is a bug affecting some OneDrive users.
"I recently updated Windows 10 to version 2004, and after the last update-related reboot OneDrive would keep complaining about not being able to connect to Windows--required for the Files On-Demand feature," a user wrote on Microsoft's Tech Community forums.
The user says they tried a workaround related to cldflt.sys offered in a support article, but to no avail—the files remained inaccessible.
Here is a look at the error messages affected users are seeing... 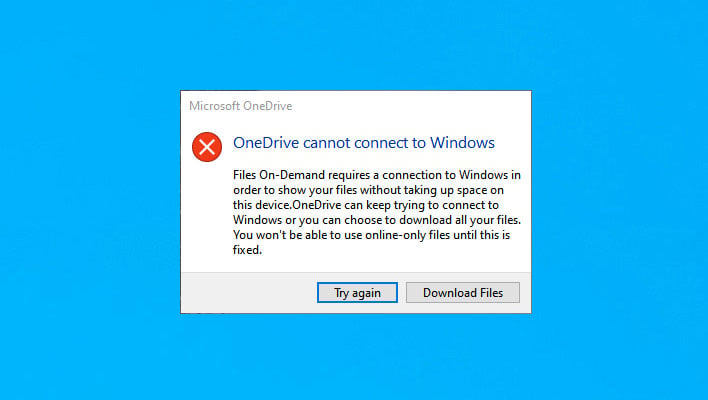 "Files On-Demand requires a connection to Windows in order to show your files without taking up space on this device. OneDrive can keep drying to connect to Windows, or you can choose to download all your files. You won't be able to use online-only files until this is fixed," the message states.
The user ultimately waved the white flag and clicked on Download Files, which is supposed to disable the Files On-Demand feature, but that did not work either. Instead, it hanged at downloading the first of the user's 35 files. In addition, the user is now unable to open files synced to OneDrive, making the situatin even worse.
Microsoft sort of acknowledged the issue when the user submitted a support request, though the company did not specifically mention OneDrive.
"Apologies for any trouble caused. Yes there is an ongoing issue with that 2004 update and many users are affected with it but hopefully the engineering team will have this fixed soon as they are working on it and let's further wait for the next update," a support rep said.
There are some possible workarounds listed in the forum thread by other users, but no universal solution. If you are affected by this, you may want to try your luck with some of them, such as resetting OneDrive. Ultimately, however, the hope is that Microsoft pushes out a patch that stomps out whatever bug is causing these headaches.
It's not clear how many people are affected by this. The same goes with other issues affecting the May 2020 Update, like the broken Fresh Start functionality, borked printers, and various known issues that Microsoft is working to resolve.