Microsoft is pushing out a fresh new Windows 10 preview build (version 19582.1001) to Windows Insiders who are subscribed to the Fast ring, and with it comes a couple of notable upgrades, including eye control improvements and better functionality with Samsung's latest Galaxy handsets (Galaxy S20 series and Galaxy Z Flip).
Eye control in Windows 10 lets users use eye tracking technology to control the mouse, type using an on-screen keyboard, and communicate with people using text-to-speech. It supports a bunch of Tobii eye tracking devices (including some that are integrated into laptops and monitors), as well as EyeTech's TM5 Mini. 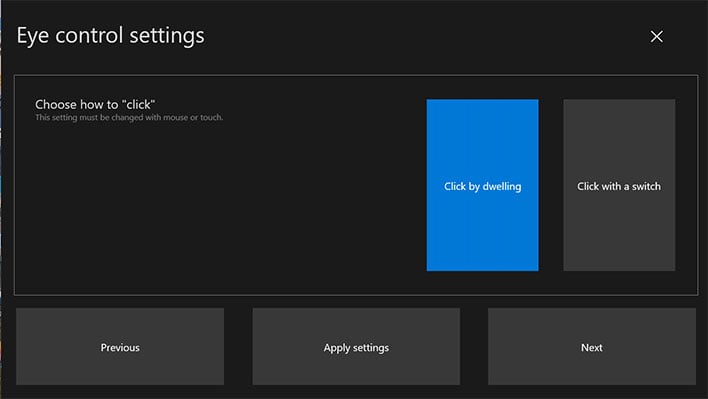 In the latest preview build, Microsoft updated the eye control settings to now support spanning multiple pages. Microsoft says this gives users "a bit more room to breathe." Users who own a supported eye tracking device can get started by following the steps outlined in Microsoft's eye control guide.
The other notable update is better integration with Samsung's latest smartphones, including the Galaxy S20, Galaxy S20+, Galaxy S20 Ultra, and Galaxy Z Flip. Starting with this preview build, the ability to copy and paste text and images between devices has been added to those handsets, as well as Rich Communication Service (RCS) messaging, and a few other tidbits.
"You can now copy and paste text and images between your phone and Windows 10 PC seamlessly. Simply turn on this feature in the Your Phone app settings and enjoy copying and pasting content with the familiar ctrl + C and ctrl + v commands on the PC or the tapping and holding gesture on your Android phone. It’s that simple," Microsoft says.
Owners of a supported handset also have the option of turning offer their smartphone screen to conserve battery life, while beaming the display to a Windows 10 PC. The black screen kicks in with the session is initiated, and then dismisses itself when it ends. Alternatively, users can dismiss the black screen at any time by pressing the power button, swiping the device screen, activating Bixby, or from within the Settings page.
Finally, the latest preview build introduces a handful of general improvements and several bug fixes.
If you would like to become a Windows Insider, go to Settings > Update & Security > Windows Insider Program and click Get Started. In order to join, Microsoft requires setting the diagnostics and feedback data collection for Full. You will not see the Get Started option if the setting is configured to Basic.