Windows 11 Updates Are Breaking The Start Menu On PCs, Here's How To Fix It

If you feel like you're serving as a tech guinea pig for the rest of us, running with Windows 11 as your daily OS driver, well, good on you. The officially-released OS does come with a few nice renovations, like the mostly-unified Settings applet, DirectStorage support, and under-the-hood improvements for Intel's latest processors.

It's also had more than its share of stumbles at this earlier stage of the game, though. Just in the last few months, we've seen .NET 3.5 crashing issues, massive authentication errors, intermittent BSoDs, disabled security packages, and freezing File Explorers—all caused by Windows updates.


Today we have reports of another issue caused by Windows Update, and this one is officially acknowledged by Microsoft. The last two cumulative updates for Windows 11, known as KB5015882 and KB5015814, are apparently really problematic. The latest issue to result from these patches is that the Start menu stops working. 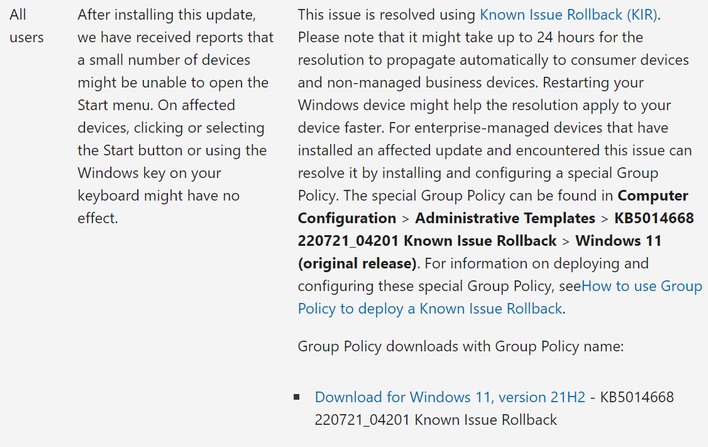 Specifically, the issue is that clicking the Start menu or tapping the Windows key brings it up for a very brief moment before it goes away. This obviously makes it impossible to actually use. It's certainly possible to use Windows without using the Start menu—your author here does—but most people don't work that way, so a broken Start menu means a broken Windows.
To its credit, Microsoft's on top of the issue, and has already released a server-side update that should address the problem. Unfortunately, it may take a bit to propagate to all affected devices. If you're having this problem, try rebooting first. If it continues, you can hit up this Microsoft page to grab an emergency fix. Scroll down to the part of the page pictured above and click "Download for Windows 11, version 21H2."