For the past year we've been hearing about how Microsoft's DirectStorage API will supercharge PC gaming with faster load times, and facilitate "virtual worlds that are more expansive and detailed than ever," to use Microsoft's own words. It holds a lot of promise, but does your PC support the feature? There's now an easy way to check.
More on that in a moment, but let's take a high-level overview of DirectStorage and what it could mean for gaming.

What Is DirectStorage And Why Does It Matter For Gaming

Storage over the years has increased in speed quite a bit, thanks to the advent of solid state drives (SSDs) and the continued evolution in both NAND flash memory and controller chip technologies. Today's fastest SSDs push reads and writes north of 7,000 MB/s, and upcoming PCI Express 5.0 models will go twice as fast (eventually).
The problem is that the speed gains are not felt across the board, and not in gaming. That's to say, you'd be hard pressed to tell a difference between a PC running a 2.5-inch SATA SSD rated to deliver 560 MB/s of sequential performance, versus one equipped with an M.2 NVMe SSD that can deliver 7,000 MB/s or more.
This is a generalization, of course, as random 4K read and write IOPS matter for certain tasks, and not everyone uses their PC in the same way. But if strictly talking about gaming, games will run and respond virtually the same between those two SSDs, despite a massive speed advantage of the NVMe model.

Enter the PlayStation 5 and Xbox Series X|S. Sony and Microsoft finally made the switch to SSD storage, and suddenly developers have a lot more incentive to tap into those speed gains. And to help them, both have made I/O side tweaks. On the Xbox Series X|S, this is known as Microsoft's Velocity Architecture, and the DirectStorage API brings the same technology over to PC.
As Microsoft points out, gaming workloads have evolved. In the old days, games would load large chunks of data into shared accessible system and GPU memory, resulting in a smaller number of I/O requests. But nowadays, games break textures and other assets into smaller chunks and load only the ones needed to render a particular scene. It's a more efficient way of doing things, at the expense bumping up the number of I/O requests compared to the old ways.
"Unfortunately, current storage APIs were not optimized for this high number of I/O requests, preventing them from scaling up to these higher NVMe bandwidths creating bottlenecks that limit what games can do. Even with super-fast PC hardware and an NVMe drive, games using the existing APIs will be unable to fully saturate the I/O pipeline leaving precious bandwidth on the table," Microsoft explains.
DirectStorage addresses this shortcoming in several ways, such as reducing per-request NVMe overhead, enabling batched many-at-a-time parallel I/O requests that can be fed to the GPU, and giving games better control over being notified when an I/O request has been completed.

Microsoft Releases A Tool To Check If Your PC Supports DirectStorage 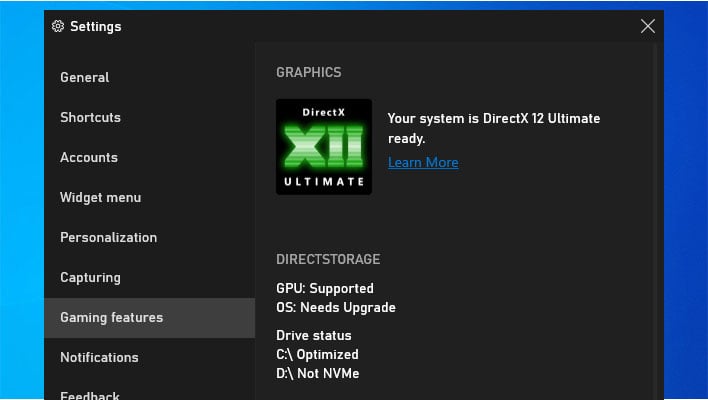 One of the requirements for DirectStorage is an NVMe SSD, and preferably a PCIe 4.0 model. You also need a DirectX 12 GPU with Shader Model 6.0 support (anything modern, really). Microsoft also recommends Windows 11, which it says has all the "latest storage optimizations built in," but it's supposed to be able to work in Windows 10 as well.
As spotted by PC Gamer, If you want to check the status of your PC, there's an easy way to do that, it's just a matter of going through a few steps.
Interestingly, on our Windows 10 system, it says "Needs upgrade" next to the OS. But the 2TB Samsung 980 Pro SSD in our system makes the cut with an "Optimized" designation, the GPU (GeForce RTX 3090 Ti) is listed as "Supported."
Microsoft has not said a whole lot about Windows 10 and DirectStorage, only that they're compatible. But it will be interesting to see if, as time goes on, the "Needs upgrade" message goes away.