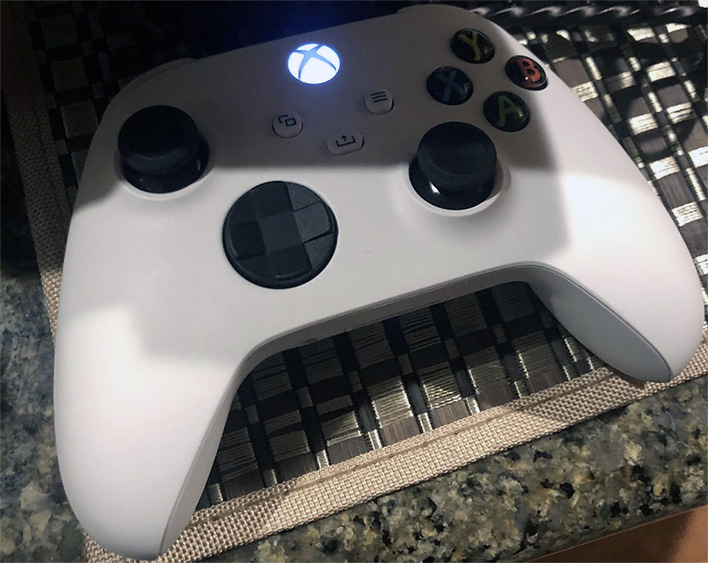 This weekend provided some interesting leaks. There was the Intel Tiger Lake benchmark entry that popped up in SiSoftware's SANDRA database, which showed massive performance gains over Ice Lake, and on the console side, a photograph of a mysterious white Xbox controller was uploaded to Reddit, and then taken down.
The color scheme of the controller has fueled speculation that this might be for an unannounced Xbox Series S console. So far, Microsoft has only announced the Xbox Series X, with a black color scheme, due out this holiday season (November or December).
According to The Verge, which plucked the photo before it was deleted and chatted with the Reddit user who uploaded it (who identified only as Wolfy_Wizzardo), the controller was spotted a party in Washington state, hosted by a child of a Microsoft employee. While at the party, Wolfy_Wizzardo snapped a photo of the controller.
They also claimed the console it was paired with was white as well, but that it "looked more squarish and the Xbox button looked bigger on it." So, what exactly are we looking at, then?
Assuming the picture is legitimate, there are two likely possibilities. One is that there is a special edition Xbox Series X draped in white. It might be a 'Day 1 Edition' or something like that, or a special build for Microsoft employees only. It could also be a prototype, or devkit.
The other plausible scenario is that Microsoft is prepping a cheaper Xbox Series S. After all, Sony is the doing the same thing with the PlayStation 5—it's making available both a regular PS5 and a disc-less PS5.
There have been plenty of rumors pointing to an Xbox Series S (codenamed Lockhart). It's said to be a lower powered and cheaper iteration of the Xbox Series X, with an unveiling scheduled for sometime in August. According to past chatter, it will feature a similar combination of Zen 2 CPU cores and Navi GPU cores, but with 4 teraflops of graphics power, as opposed to 12 teraflops in the Xbox Series X.
Whether that's the case or not, we will have to wait and see. One final note—in the image at the top of this article, I color corrected the image in Photoshop, to remove the yellow lighting. You can click to enlarge it, with original lighting.
Thumbnail/Top Image Source: The Verge via Reddit