Intel’s 11th Generation Core processors for upcoming notebooks and ultrabooks, codenamed Tiger Lake, are due to arrive sometime in the next few months. Intel has an event planned for early September, at which it’s expected that all of Tiger Lake’s secrets will be revealed. For now, however, much of what has been discussed are preliminary specifications Intel has disclosed or simply rumor and speculation. Among those rumors though, it has been suggested that Tiger Lake will offer some serious performance gains over its predecessors, and if a leak that just hit the web is true, that certainly appears to be the case.

The SiSoft SANDRA results database was updated earlier today with an array of 11th Gen Core i7-1165G7 (4C / 8T) benchmark results. You can see all of the results on this page, though we’ve captured them all here in the event they get pulled from the database. 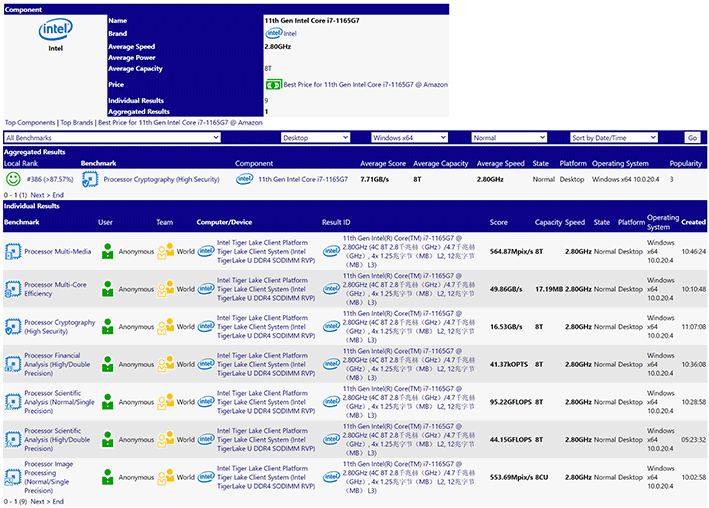 
There are results present for a number of SANDRA’s benchmarks, including a few cryptography, image processing, and financial and scientific analysis tests. For most of those, we unfortunately don’t have relevant, in-house numbers on hand for comparison. For the processor Multi-Media result, however, we have comparable data available for an Ice Lake-based Core i7-1065G7, running both 15W and 25W TDP configurations.

The Core i7-1164G7 vs. Core i7-1065G7 is the most direct comparison in terms of currently available products in Intel’s line-up. Both are quad-core / eight-thread (4C / 8T) processors, targeting the same class of notebook / mobile device. We did, however, snag a few of the most recent entries in SANDRA’s database for a few mother mobile processors.

As with any benchmark leak, these Tiger Lake results must be taken with a grain of salt. We don’t now the state of the system it was tested in and whether or not is has been fully optimized or altered in any way. Still, it’s fun to speculate, and if the results are on-par with what retail-ready products will deliver, and battery life look good, it seems like Intel’s got a big upgrade in-store for ultrabook-toting road warriors later this year.