Without a doubt, the thing I'm most excited about in regards next-generation game consoles is the promise of faster storage combined with techniques designed to virtually eliminated load times and, importantly, in-game transitions. I have no idea if the Xbox Series X or PlayStation 5 will live up to the promises made by Microsoft and Sony, respectively, but I'm hopeful. As we wait to find out, Microsoft cranked the hype dial to 11 by detailing the Xbox Velocity Architecture that will play a key role in this.
Let me back up a moment. Even without a jump to solid state drive (SSD) storage, the Xbox Series X and PS5 are intriguing consoles. Both are being powered by custom silicon based on AMD's Zen 2 CPU architecture and upcoming RDNA 2 graphics architecture, with hardware support for real-time ray tracing. They're high-powered PCs in console digs.
That's wonderful, but it also means storage can be a bottleneck. This is something Microsoft readily admits played a role in designing the Xbox Series X.
"As we analyzed the storage subsystem, it became clear that we had reached the upper limits of traditional hard drive technology and to deliver on our design aspirations, we would need to radically rethink and revolutionize our approach with the Xbox Series X," the company explains in a blog post.
Microsoft also divulged a dirty little secret that's not truly a secret—developers use in-game elements like narrow pathways, hallways, or elevators (I'm looking at you, 2K Games) to "mask the need to unload the prior zone's assets from memory while loading in new assets for the next play space." Being an impatient person, I'd love to see this element from console gaming disappear forever.

The Xbox Velocity Architecture Is A Potential Game Changer


Whether they actually will disappear depends on how much of Microsoft's Xbox Velocity Architecture is truly gaming changing. Just the introduction of SSD storage along should quicken the pace, but according to Microsoft, that's just one part of the equation.
"If our custom designed processor is at the heart of the Xbox Series X, the Xbox Velocity Architecture is the soul. Through a deep integration of hardware and software innovation, the Xbox Velocity Architecture will power next-gen gaming experiences unlike anything you have seen before," Microsoft says.
The custom SSD in the Xbox Series X is a 1TB NVMe model capable of 2.4GB/s of raw I/O throughput, which is more than 40x the throughput of the Xbox One's HDD storage. As an added bonus, Microsoft says that while SSDs in PCs throttle performance as the temps rise, the SSD in the Xbox Series X is designed to offer consistent, sustained performance rather than braggadocios peak figures. We'll see.
Beyond the raw speed, Microsoft outlines other factors related to storage, including hardware accelerated decompression. 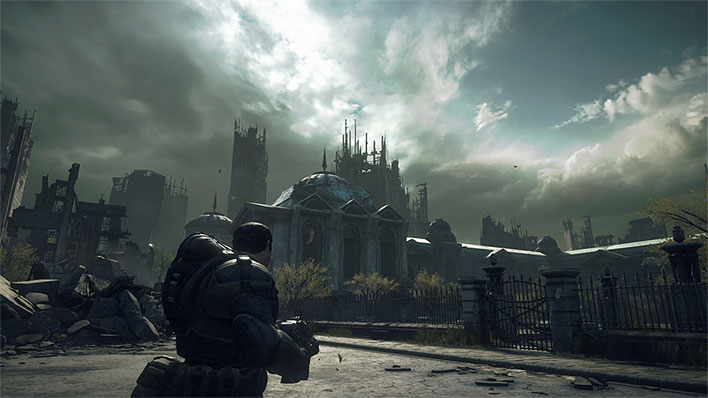 "Game packages and assets are compressed to minimize download times and the amount of storage required for each individual game. With hardware accelerated support for both the industry standard LZ decompressor as well as a brand new, proprietary algorithm specifically designed for texture data named BCPack, Xbox Series X provides the best of both worlds for developers to achieve massive savings with no loss in quality or performance," Microsoft says.
Microsoft assumes a 2:1 compression ratio, which would deliver an effective 4.8GB/s of I/O performance. That's equivalent to a 100x increase in current generation consoles.
There's also a new DirectStorage API at play. According to Microsoft, this is a big improvement over storage file I/O APIs that were designed more than 30 years ago. Importantly, the new API enables developers to have fine grain control over their I/O operations, which will be key in getting rid of load times and offering fast travel that is truly fast.
The last element Microsoft discusses in its blog post is sampler feedback streaming (SFS). This essentially allows developers to load smaller portions of graphics textures into memory for on-demand access, rather than shoehorning huge mipmaps into memory, thereby hogging resources.
"This innovation results in approximately 2.5x the effective I/O throughput and memory usage above and beyond the raw hardware capabilities on average. SFS provides an effective multiplier on available system memory and I/O bandwidth, resulting in significantly more memory and I/O throughput available to make your game richer and more immersive," Microsoft says.
How this all comes together and affects the gaming experience on the Xbox Series X remains to be seen. I'm hopeful it does actually prove to be game changing, though time will tell.
The Xbox Series X is still on track to launch in holiday 2020 (November or December).