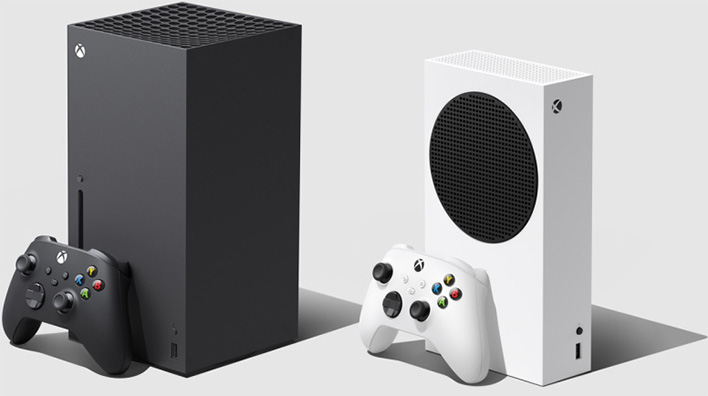 Oh what a time to be a video gamer, and the platform hardly matters. Fancy PC gaming? Great, the GeForce RTX 30 series is off to a hot start (minus the preorder snags), and Big Navi looms right around the corner. Prefer to game on console? Sony has opened up pre-orders for the PlayStation 5 (also with snags), and Microsoft will be doing the same for its upcoming Xbox Series X and Xbox Series S consoles very soon. How soon?
Next week, as a matter of fact. Pre-order availability kicks off September 22, which is next Tuesday, and barring any hiccups, you will be able to choose between either one. Note that there are key differences between the two. For one, the Xbox Series X is priced at $499 and the Xbox Series S is priced at $299.

The reduced price of the Xbox Series S reflects a few downgrades. Namely, it has a less powerful GPU (RDNA 2 with 20 compute units capable of 4 TFLOPS, versus 52 CUs and 12 TFLOPS), less memory (10GB of GDDR6 versus 16GB of GDDR6), 512GB of storage (versus 1TB), and no optical disc drive. It also tops out at 1440p at 120 frames per second, while the Xbox Series X can play games at up to 4K at 60 fps (or 120 fps at lower resolutions).
Otherwise, both consoles are based on the same CPU and GPU architectures (Zen 2 and RDNA 2, respectively). Additionally, the CPU specs are the same between both consoles—8 cores clocked at 3.8GHz (3.66GHz with SMT).
I'm a bit more partial to the more traditional form factor of the Xbox Series X, as it looks like it would have an easier time fitting into an entertainment center. But if you plan to games at 4K and/or want the Blu-ray drive, the Xbox Series X is the better option.

So the Xbox Series X and Xbox Series S will both go up for pre-order on September 22. As to where you can place an order online and at precisely what time, it varies by region. Here's a breakdown...
In addition, pre-order availability will start at 9:00 am CEST across Europe, the Middle East, and Africa at the Microsoft Store, Amazon, MediaMarkt, GameStop, VNAC, Elkjøp/Elgiganten, and other participating retailers, Microsoft says.
It remains to be seen how actual availability will shake out. For example, the GeForce RTX 3080 is pretty much sold out everywhere (unless you are willing to pay a grossly inflated price on eBay), and the PlayStation 5 is equally tough to come by.
That said, Microsoft will also be offering up pre-orders through its Xbox All Access program. This essentially allows you to finance your purchase, with a subscription to Xbox Game Pass Ultimate (which now includes EA Play as well). For the Xbox Series X, you're looking at $34.99 per month for 24 months, and for the Xbox Series S, it costs $24.99 per month for 24 months. Pre-orders through the Xbox All Access program will also kick off September 22, at the following times, places, and regions...
There is no way of knowing how the pre-order situation will go, once it's live. Your best bet is to be ready when they go live. That entails logging into different retailers and making sure your account is updated with current shipping info, payment information, and so forth.
In any event, good luck!