Updated 9/9/2020 @ 3:08pm
This article has been updated to include the official Xbox Series X trailer from Microsoft embedded below (the original story continues below, unedited, following the trailer):


It’s been a busy day for Microsoft’s next-generation Xbox Series S console. The first details about the console leaked extensively early this morning, after which Microsoft simply threw up the white flag and officially announced the console and its $299 price tag.

Now, veteran Microsoft leaker WalkingCat — who was among the first to provide details on the Xbox Series S along with a short video clip of the console — is adding more fuel to the fire with yet another video clip. However, this one is more extensive, and is actually an upcoming commercial for the Xbox Series S which confirms many of its features.

no point holding this back now I guess pic.twitter.com/SgOAjm3BuP

The Xbox Series S is confirmed to be the smallest Xbox ever, and is roughly 60 percent smaller than its Xbox Series X big brother. Those smaller dimensions also mean that there’s less room for exotic cooling hardware, and no provisions for an optical drive. It also means that the Xbox Series S isn’t as performant as its overachieving sibling, with Microsoft saying that the console can deliver a 120fps gaming experience at up to a 1440p native resolution. While it doesn’t natively play games at 4K resolution like the Xbox Series X, the Xbox Series S will offer 4K upscaling support for games. 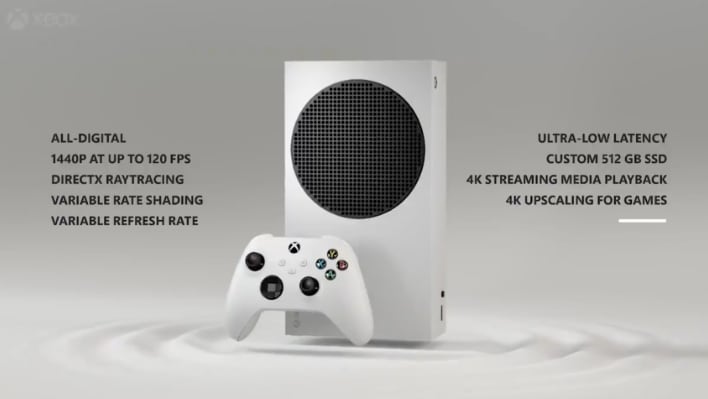 Despite the reduction in outright performance, the Xbox Series S still used an RDNA 2-based Radeon GPU, as Microsoft confirms that there is support for DirectX RayTracing, Variable Rate Shading, and Variable Refresh Rate. It should also be noted that the Xbox Series S still features a custom NVMe PCIe 3.0 SSD with the Xbox Velocity Architecture, which allows for insanely fast game loading speeds. However, its capacity has been cut in half from 1TB on the Xbox Series S to just 512GB. We hope, however, that the proprietary external SSD interface (using Seagate-branded hardware) is still available to add more space.