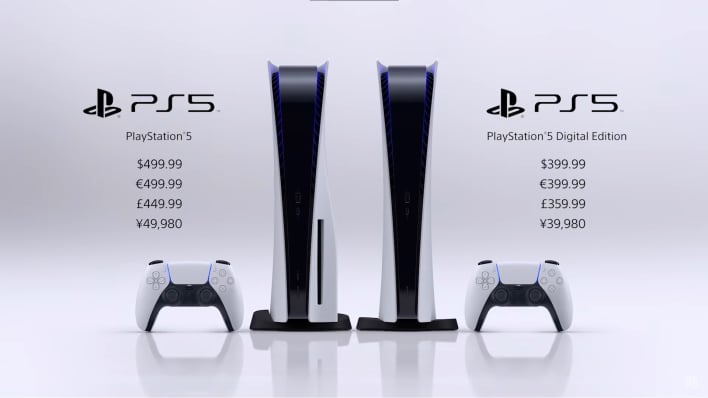 Today, Sony hosted their PlayStation launch stream. During the stream, they showed off a plethora of games and now, we finally have pricing for the PS5.
The PS5 comes in at $499 and $399 for the normal PS5 and the digital-only PS5, respectively.  This puts the normal PS5 on par with the Xbox Series X while the PS5 digital is $100 more expensive than the Xbox Series S. The PS5 editions will be available in the United States on November 12th with the rest of the world following on November 19th.

Sony also showcased over 10 different game trailers before getting to the meat of the stream. Some of these games we had seen before, some we got to see more of, and some were most definitely new. Below, we have listed the trailers for some of what was shown off during the stream:

Beside those trailers we also got a peak at the following games which you can see for yourself in the livestream or on Sony's YouTube channel:

Along with the new games announced for the PS5, gamers will get access to some old ones as well with PlayStation Plus for PS5. This subscription-based service could be Sony's real counter to xCloud and Gamepass options for the Xbox.  PS5 owners will be able to download and play God of War, Monster Hunter, Fallout 4, Mortal Combat, Battlefield 1, and The Last of Us Remastered among other titles.  This means some of the biggest titles of the PS4-era will be playable on the PS5 for some "backwards compatibility." Perhaps games will be continually added to the list, making this a solid competitor to Gamepass.
With this announcement among others, it is officially an exciting time for gaming.  Performance is increasing and prices are dropping while games are also becoming more accessible through game streaming options so you won't have to buy a $70 game from Take-Two.  While waiting for the PS5 or Xbox (or new NVIDIA or AMD GPUs for that matter), keep an eye on HotHardware as we get you the latest on all of these devices.