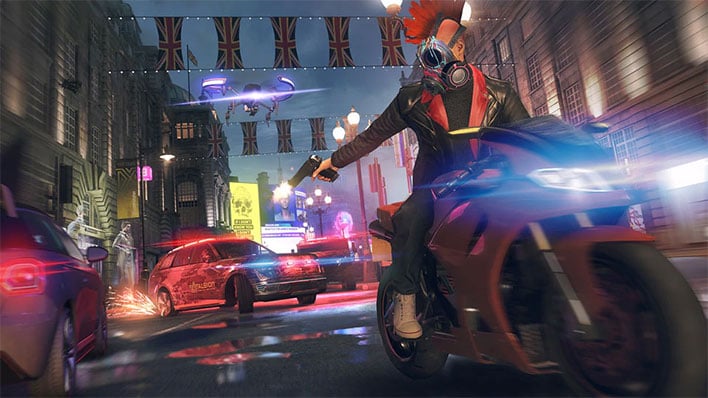 Real-time ray tracing in games is not going away, nor do we want it to—compared to traditional rasterized rendering, sprinkling in ray-traced visuals can make scenes pop with realistic reflections and other effects. The cost, of course, is a performance penalty. How much of one depends on the game. As it pertains to Ubisoft's upcoming Watch Dogs: Legion game, enabling ray-traced visuals on PC could require some meaty hardware.
Due out later this year, Watch Dog: Legion will land on current-generation consoles, the next-gen PlayStation 5 and Xbox Series X, Google's cloud-based Stadia platform, and of course Windows PCs. It is the third installment in the Watch Dog series. Set in London, the game offers up an open world in a third-person perspective, with the ability to play various different characters.
It will feature real-time ray tracing, a feature that is already supported by NVIDIA's GeForce RTX graphics cards, and will be present on both next-generation consoles. Same goes for some of AMD's next-gen RDNA 2 graphics cards for PC, and upcoming Ampere-based graphics cards from NVIDIA.
Ahead of the game's launch, the folks at Digital Foundry had an opportunity to preview the game with ray tracing enabled. Have a watch...
They previewed the game on a high-end PC equipped with a GeForce RTX 2080 Ti, with the settings in the game maxed out. As noted in the video, the game "sets a high bar for packing in so many small details" and is "often a beautifully lit game."
How did it fare, performance wise? They kept the game locked at 30 frames per second, because upping the ante to 60 fps "proved a stretch too far" with ray tracing enabled the settings maxed out. NVIDA's DLSS 2.0 technology should help, but they didn't have a chance to test that out in the above preview.
Nevertheless, it underscores how demanding ray-traced visuals can be. At present, the GeForce RTX 2080 Ti is the highest end graphics card in the consumer segment (outside of the Titan cards), and without DLSS 2.0, it can't consistently push 60 fps in Watch Dogs: Legion (in its current state) with all the bells and whistles selected. That's a bit sobering.
This also raises the question of what the PS5 and Xbox Series X will capable of handling. Enabling ray tracing at 1080p is a foregone conclusion, but what about at 1440p or even 4K? That will depend in large part on just how capable the RDNA 2-based graphics hardware ends up being (which, incidentally, will be more powerful in the Xbox Series X than the PS5).
One thing is for, which is that interesting times in the gaming space await.