AMD is going to officially add a new member to its Radeon RX 6000 series today, and you can watch the birthing of a new SKU live during a scheduled event, if you so desire. It kicks off at 11:00 am Eastern (8:00 am Pacific). We fully expect this will be a Radeon RX 6700 XT unveiling, as has been the subject of numerous leaks and rumors leading up to today.

The event will be livestreamed on AMD's "Where Gaming Begins" portal, and also on YouTube. You needn't go anywhere, though, as you are more than welcome to catch the event right here in our humble spot on the web (it's a BYOB affair)...


There is no mention of how long the event will last, though we reckon it will probably stretch to about an hour, based on past livestreams similar to this one. That is just our best guess, though. The only thing we can say with 101.9 percent certainty is that AMD will "unveil additional details about the latest addition to the Radeon RX 6000 family of graphics cards," because the company said so.

What To Expect During AMD's 'Where Gaming Begins' Event

While we wait for the event to unfold, we can share some information about what it might entail. A Radeon RX 6700 XT unveiling seems like a foregone conclusion, but beyond that, rumor has it AMD might announce that reference and custom models will launch to retail in a couple of weeks, on March 17. Regardless of the exact day, we don't anticipate stock lasting long, because GPUs in general are in short supply and are hot ticket items right now.
Interestingly, AMD seemingly confirmed the Radeon RX 6700 XT will feature a Navi 22 XT GPU underneath the hood. The revelation come by way of an animated GIF the company shared on social media ahead of today's event. Initially, the GIF was hosted on a website with "Navi 22 XT" in the URL, which AMD later changed. 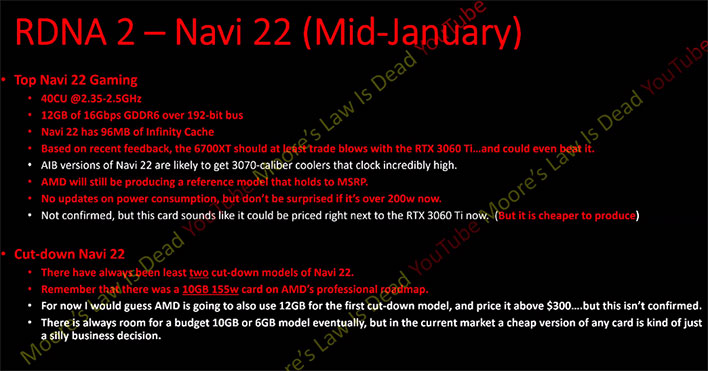 Past leaks also suggest the card will feature 40 compute units, 2,560 streaming processors, and 12GB of GDDR6 memory (16Gbps) on a 192-bit memory bus. It will perhaps be clocked at 2.35GHz to 2.5GHz.
As a point of comparison, the regular Radeon RX 6800 (Navi 21 XL) sports 60 CUs, 3,840 SPs, and 16GB of GDDR6 memory (also 16Gbps) on a 256-bit bus. It also boasts a 2,105MHz boost clock.
Expectations based on past leaks is that the Radeon RX 6700 XT will offer comparable performance to NVIDIA's GeForce RTX 3060 Ti, and beat out the regular (read: non-Ti) GeForce RTX 3060. It will be interesting to see how AMD's performance claims stack up to the rumors, and of course the real story will unfold when we have a chance to test the Radeon RX 6700 XT for ourselves.
What about pricing? Rumors have been rather thin on that front. It will obviously be south of $579, which is the MSRP for the Radeon RX 6800. The GeForce RTX 3060 Ti, meanwhile, carries a $399 MSRP. We anticipate the Radeon RX 6700 XT will be priced similarly.