So AMD has an event planned for March 3, during which time it will unveil the "latest addition" to its Radeon RX 6000 series lineup. We have a pretty good idea what that will be—the rumored and seemingly inevitable Radeon RX 6700 XT, and perhaps a regular Radeon RX 6700 (read: non-XT) as well. Whatever it ends up being called, it appears AMD has accidentally confirmed it will rock a Navi 22 GPU.
Those are the next logical additions to AMD's rather thin RDNA 2 lineup, which currently consists of the following three models...
Meanwhile, rival NVIDIA today launched its fifth GeForce RTX 30 series graphics card to retail, the GeForce RTX 3060 (also read: non-Ti), priced at $329 (MSRP, anyway), making it the most affordable Ampere card yet. It joins the GeForce RTX 3060 Ti ($399 MSRP), GeForce RTX 3070 ($499 MSRP), GeForce RTX 3080 ($699 MSRP), and GeForce RTX 3090 ($1,499 MSRP).
We'll find out soon enough where pricing lands on the Radeon RX 6700 series, which if we had to guess, will debut at $499 or below. The only thing we can say with 100 percent certainty is that it will be priced less than $579, which is how much the Radeon RX 6800 costs.
As for what will be underneath the hood, the detectives over at Benchmark.pl noticed that the URL for a recent trailer presentation AMD posted to Twitter highlighting the March 3rd event mentioned Navi 22 specifically. Have a look... 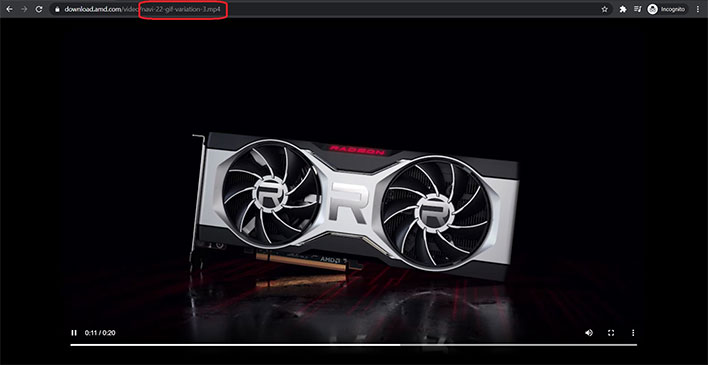 It's an animated GIF of AMD's upcoming graphics card, and initially it pointed to https://download.amd.com/video/navi-22-gif-variation-3.mp4. Not that it comes as a surprise that AMD will be using a Navi 22 GPU to power its Radeon RX 6700 series, but even still, this kind of accidental confirmation straight from the source does not happen very often.
After word began to spread of the unofficial confirmation, AMD changed the latter part of the URL to 700302-radeon-2-fan-cooler-design.mp4 (there is also a .webm version).
We have seen Navi 22 mentioned in various previous leaks, including within a breakdown of a Linux GPU driver, and even in a macOS driver.
If past leaks and rumors end up being true, the Radeon RX 6700 XT will feature a Navi 22 XT GPU with 40 compute units and 2,560 streaming processors, along with 12GB of GDDR6 memory on a 192-bit bus. The Radeon RX 6700, meanwhile, is rumored to arrive with a Navi 22 XL GPU and 6GB of GDDR6 memory, also on a 192-bit memory bus.
Stay tuned, as we will find out for sure in less than a week.