AMD stuck with the script when launching a new generation of graphics cards, by focusing on higher end models first. So right out of the gate, we had the Radeon RX 6900 XT ($999 MSRP), Radeon RX 6800 XT ($649 MSRP), and Radeon RX 6800 ($579 MSRP). The real money, however, is made in selling more affordable options. To that end, AMD could find itself in very good shape if the latest rumors regarding its upcoming Radeon RX 6700 XT prove true.
As things stand, AMD is going up against a stout lineup from rival NVIDIA, which has so far launched its GeForce RTX 3090 ($1,499), GeForce RTX 3080 ($699 MSRP), GeForce RTX 3070 ($499), GeForce RTX 3060 Ti ($399 MSRP), and GeForce RTX 3060 ($329 MSRP). It has five cards in total base on Ampere, versus three card from AMD based on RDNA 2. In addition, NVIDIA's least expensive Ampere card is $250 less than AMD's least expensive RDNA 2 part.
You can bet that in time, AMD will flesh out its current generation lineup with more Radeon RX 6000 series SKUs. One of those is the aforementioned Radeon RX 6700 XT, which AMD opted not to unveil during its CES 2020 keynote, despite rumors that it might do so (alongside a non-XT variant). While it did not manifest at the event, it undoubtedly will at some point.
Should NVIDIA be worried? Perhaps so, if YouTuber "Moore's Law Is Dead" is right on money. In a recent video posted to YouTube, he says AMD is poised to dominate the mid-range GPU market with the Radeon RX 6700 XT, if the company can supply enough cards. That point should not be overlooked, as it is supposedly the reason why AMD did not unveil the card at CES.
The Radeon RX 6700 XT is said to be based on Navi 22, with 40 compute units (CUs) running at 2.35-2.5GHz, and 12GB of GDDR6 memory (16Gbps) on a 192-bit bus. It is also said to feature 96MB of Infinity Cache. 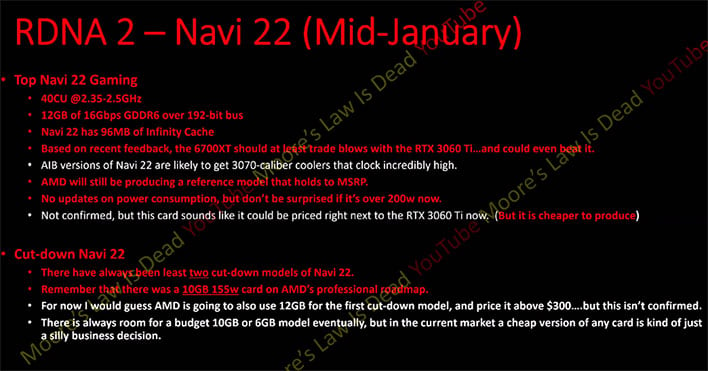 Specifications are one thing, but what about performance? This is where things interesting. According to what the YouTuber has been hearing from unspecified sources, the Radeon RX 6700 XT should, at the very least, trade blows with the GeForce RTX 3060 Ti, if not beat it outright. And that means it will end up crushing the regular GeForce RTX 3060, if the information is true.
One thing that could work in AMD's favor is that add-in board (AIB) partners will supposedly be using cooling solutions that are on par with what is used for GeForce RTX 3070 graphics cards. If so, this should help the Radeon RX 6700 XT hit high clocks.
Even better, it's said that yields are excellent. Who knows if supply will meet demand, but having great yields certainly helps in that regard. As for pricing, the expectation is that it will be in line with the GeForce RTX 3060 Ti. We'll have to wait and see, but based on the current rumors, the Radeon RX 6700 XT could end up being a highly popular card.