AMD is going to unveil at least one new graphics card this week, which is almost certainly going to be the Radeon RX 6700 XT. Rumor has it the non-XT model will not make an appearance, though we will have to wait and see (and not very long—the unveiling is scheduled for this Wednesday, March 3). Ahead of the official launch, legitimate looking press renders have emerged, showcasing two custom models from ASUS.
The one you see above is said to be the ASUS Radeon RX 6700 XT TUF Gaming OC. While no official details are yet available, AMD essentially (and inadvertently) confirmed last week that the Radeon RX 6700 XT will sport a Navi 22 GPU inside. The rare slip-up on AMD's part came by way of a revealing URL hosting an animated GIF related to the March 3 event.
Beyond that detail, we have to rely on leaks and rumors for the time being, and according to Videocardz, the TUF Gaming OC variant occupies nearly three full expansion slots (meaning it might be marketed as a 2.7-inch slot design, but you'll need three slots available). It's also said to be 32.2 cm (12.68 inches) in length.
We can see from the press render that ASUS is going with a triple-fan cooler on this model, to help facilitate whatever factory overclock it applies (as well as any end-user overclock attempts). And while not shown, it's said the card will draw power from a pair of 8-pin PCIe connectors, rather than the 8-pin + 6-pin that AMD is expected to use on its reference model. 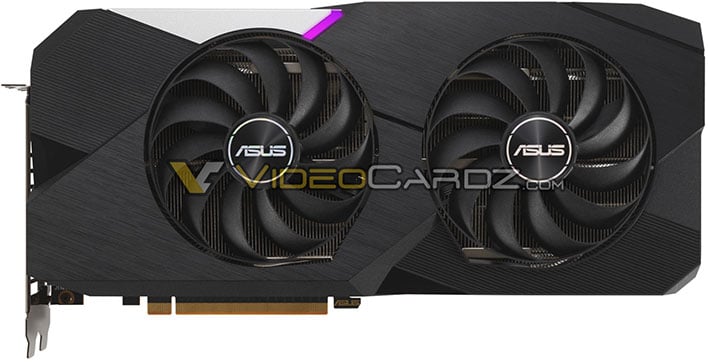 The site also got its mitts on a press render for the ASUS Radeon RX 6700 XT Dual, which as the model name implies (and is obvious from the image), sports a two-fan cooler. This one is supposedly confirmed to have a 2.7-inch slot design, so like the TUF Gaming OC model, it effectively occupies three slots inside your PC chassis. It is not overclocked, though.
As for drawing power, the Dual model sticks with an 8-pin + 6-pin PCIe connector arrangement, rather than dual 8-pin collectors. It's also shorter than the TUF Gaming OC model, measuring 29.7 cm in length (11.69 inches).
Pricing is not yet known for these cards, or the Radeon RX 6700 XT in general. It's rumored the new SKU will wield 12GB of GDDR6 memory, and apparently this latest leak confirms as much. Additionally, it was previously rumored the Radeon RX 6700 XT will handily crush the GeForce RTX 3060, and deliver performance more in line with the GeForce RTX 3060 Ti. We shall see soon enough.