For whatever reason, there aren't many solid state drives (SSDs) that combine RGB lighting with the M.2 form factor and PCIe Gen 4x4 spec, or at least not many that I could find. They are so few and far between that Viper Gaming, a division of Patriot Memory, has erroneously laid claim to launching the very first such model with its VPR400 series.
Viper Gaming bills the VPR400 as the "world's first RGB M.2 PCie Gen 4x4 SSD," and while untrue, the company can be forgiven for the oversight. When I went digging for other such models, I was confident I would find a few, but only came across one—WD's Black SN850. Well, two if you want to count the Black SN850X, which will be available next month.
I almost missed it myself because "RGB" isn't in the model name, and you can buy the drive without a heat sink. Sill, such a product exists. If there are others I'm overlooking, feel free to chime in below in our comments section.
In any event, the VPR400 joins rare company. The RGB lighting is also more pronounced with, by my count, 16 different sections of illumination. Viper Gaming says the lighting is fully customizable with its other peripherals via its Viper RGB 3.0 utility. It's also compatible with ASRock's Polychrome Sync, ASUS's Aura Sync, Gigabyte's RGB Fusion, and MSI's Mystic Light Sync. 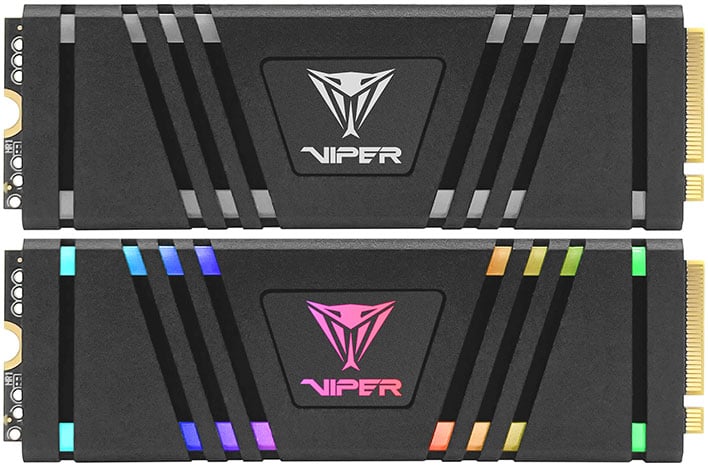 Lighting aside, Viper Gaming's serving up two capacities: 512GB and 1TB. Both are powered by Innogrit's DRAM-less IG5220 "RainierQX" controller, same as found on drives like Patriot's P400 SSD and Adata's XPG Atom 50. This means you're looking at speeds more in line with the first generation of PCIe 4.0 models rather.
More specifically, the 1TB model sports sequential read and write speeds of up to 4,600MB/s and 4,400MB/s, sequentially, along with up to 600K IOPS of random read performance and 500K IOPs for random write performance. The 512GB model, meanwhile, serves up the same sequential read speed and random read and write performance, but delivers sequential reads of up to 3,600MB/s.
Those are all fast metrics in their own right, though not on par with the speediest PCIe 4.0 models, which push data transfers into 7,000MB/s territory and even a little beyond. However, Viper Gaming makes an interesting claim in regards to cooling and throttling.
"The Viper VPR400 SSD is different from the traditional NVMe SSDs, which set performance restrictions that limit read and write data transfer speeds to maintain a workable operating temperature. Instead, the Viper VPR400 supports the Thermal Throttling technology using a built-in thermal sensor and firmware to wisely manage the SSD operational performance and temperature. This technology can effectively prevents overheating while efficiently commanding the best performance under dynamic conditions," the company claims.
Hopefully we can procure a unit to see how the VPR400 SSD series performs for ourselves. We'll also have to wait to find out pricing info—Viper Gaming only says the its latest SSD series will be available later this month, backed by a 5-year warranty.