Western Digital is rolling out some new high speed storage options for PC and console gamers. One of them is the Black SN580X shown above, an internal solid state drive with an NVMe interface, and other other is the Black P40 Game Drive, a fast and portable storage solution with a USB 3.2 Gen 2x2 interface and RGB lighting.
WD reserves its Black label for its most performant storage drives, and up until now the flagship crown belonged to its Black SN850, which is rated to deliver sequential read speeds of up to 7,000MB/s and sequential write speeds of up to 5,100MB/s.

"With minimized latency, predictive loading and adaptive thermals management, gamers can expect an incredible gaming experience with fast load times, rich visual experience and uncompromising thermal performance. The downloadable WD Black Dashboard with its new Game Mode 2.0 (Windows only) unlocks PC performance-boosting features so gamers can play, stream, record, and dominate at the top of their game," WD says.
There's no mention of the specific NAND flash memory chips or controller hardware, but this is another fast drive that leverages the PCI Express 4.0 bus to achieve speeds north of 7GB/s. That means you'll need a modern platform with PCIe 4 support to take full advantage of its performance capabilities, though it's backwards compatible with older platforms too.
In addition to a speed bump, the Black SN850X offers up to twice the capacity of the SN850 with a new 4TB option, in addition to 2TB and 1TB models. All three capacities are offered with or without a heatsink and are compatible with the PlayStation 5. The drives will be available in July starting at $189.99. 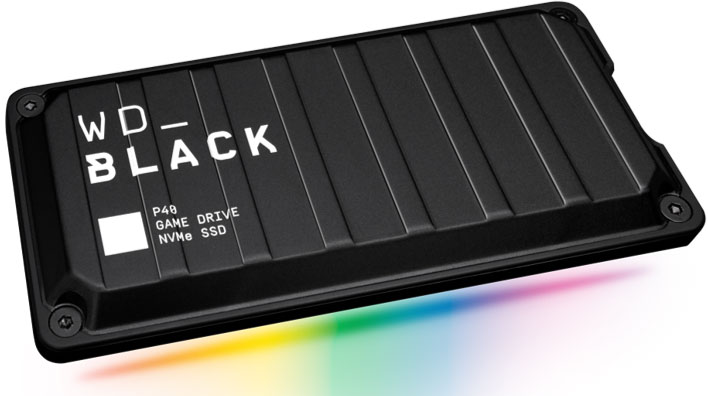 The other new addition is the Black P40 Game Drive, a portable storage solution with an NVMe SSD tucked inside. From what we can tell, it's similar in makeup and specifications to the P50 Game Drive, but adds RGB lighting to the mix (Windows only) and is a little bit cheaper.
Like the P50 Game Drive, the new P40 Game Drive is being offered in 500GB, 1TB, and 2TB options. It's outfitted with a USB 3.2 Gen2x2 interface and is rated to deliver read speeds of up to 2,000MB/s. These drives will be available sometime this summer starting at $119.99.

In addition to fast storage for gamers, WD continues to invest in capacious mechanical hard disk drives (HDDs) with two new models announced today at its What's Next Western Digital event, the 26TB Ultrastar DC HC670 UltraSMR and the 22TB Ultrastar DC HC750. These two drives rank as the highest capacity HDDs available and are purpose built for cloud storage providers and hyperscale customers.
"Everything we do starts with the belief in human potential as it intersects digital innovation, and in turn, creates possibility," Western Digital CEO David Goeckeler said. "This possibility is fueled by a technology platform that the world’s innovators are building on and enabling the best new experiences—intelligent devices, powered by the cloud, connected by high performance networks. We have only scratched the surface on the value of data and the technologies that unlock it."

The 26TB model packs 2.6TB per platter, providing an 18 percent jump in capacity compared to conventional recording capacities. UltraSMR is a denser form of SMR technology, and according to WD, this jump in capacity "could lead to a substantial reduction in TCO and operating costs."