Developer Yuri Bubliy has shared some AMD Radeon performance presets, which he has aptly named the “Radeon Monster Profiles” or RMP. Upon applying these skillfully tuned collections of Radeon RDNA 2 GPU settings, Bubliy claims users will be able to take advantage of performance gains as high as 13%, and even gain performance while using less power. In the headlining example of an RMP in action, the developer showed an AMD Radeon RX 6800 XT elbow past NVIDIA’s formidable GeForce RTX 3090 Ti in 3D Mark Time Spy.
Via social media, Bubliy informed followers that his new RDNA 2 video card presents would deliver some surprises. He backed up that statement with some 3D Mark performance charts showing power consumption and performance of a sample RX 6800 XT tested with various profiles applied against stock RDNA 2 GPUs, and the current highest-performing rival from NVIDIA—the GeForce RTX 3090 Ti. 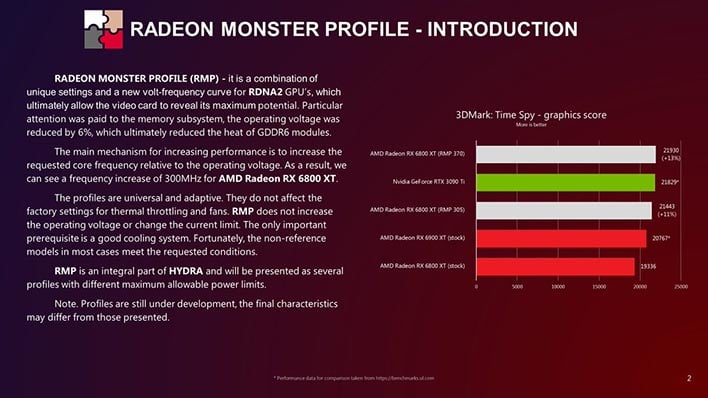 Getting the most out of a graphics card in terms of performance and efficiency is not always simple. Enthusiasts enjoy having a multitude of options and clamor for ‘tweakable everything’ to which AMD’s modern day drivers happily oblige. However, there are so many settings which are interdependent in some way or another that it is sometimes hard to optimize manually, or to see the wood for the trees. 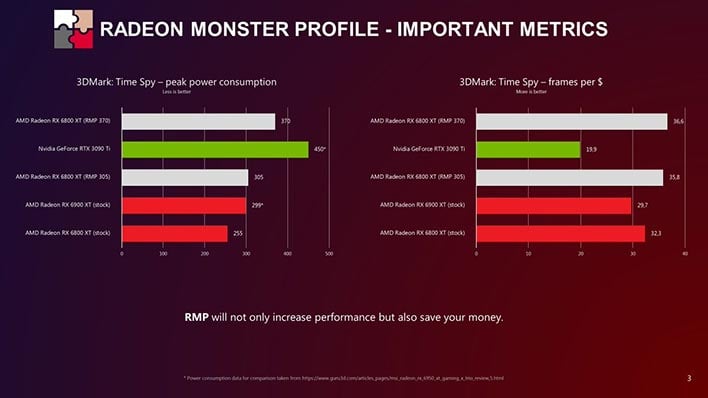 With the complexity outlined above in mind, Bubliy’s RMP utility has been described as a kind of magic bullet for balancing all the adjustable parameters of your RDNA 2 graphics card to wield its ultimate power. Under the hood, the RMP tool is claimed to adjust more than just the typical user-settings, but “a combination of unique settings and a new volt-frequency curve for RDNA 2 GPUs.” The developer goes on to explain that the main mechanism for GPU optimizations is to increase the core frequency relative to the operating voltage—illustrated by the 300MHz gain for the RX 6800 XT in his provided example.
You may ask how such profiles can work ‘universally’ due to the reality of the silicon lottery and other hardware variables, but Bubliy insists that RMP profiles “are universal and adaptive.” He does however warn that RMP’s gains can be limited by poor cooling, but notes most third party RDNA 2 designs have ample cooling solutions ready for good performance gains.

The reference GeForce 3090 Ti scores shown mostly hold up. 21,691 is the currently-listed average graphics subtest score for Time Spy, but the card can be pushed even higher to even exceed 25,000. The RX 6800 XT can nearly touch 25,000 as well, but its average performance is only 19063. Of course such a run requires an exotic configuration, and this utility claims to be a run of the mill Radeon RX 6800 XT going toe-to-toe with the average GeForce 3090 Ti, not a beefier 6900 XT or 6950 XT—the latter of which has scores posted above 27,000 points.
We hope RMP can live up to its performance and user-simplicity claims when it starts to get distributed. He does say it should be adaptable to RDNA 3 cards as well once they arrive, provided AMD keeps most of the same levers and dials exposed. Bubliy, who is also developing a Ryzen DDR5 calculator, says his monstrous GPU utility is set to arrive this fall.