China’s largest gaming firm, Tencent Holdings, aims to grow its stake in France’s biggest gaming firm, Ubisoft Entertainment. Reports today suggest that Tencent, which already owns a 5% stake in Ubisoft, is looking to do a deal to acquire shares from the founding Guillemot family, which owns 15% of the French gaming firm. Whatever the actual percentage holding is at the end of this impending investment, Tencent is said by insiders to be aiming to become the single largest shareholder in the publisher of hit PC franchises such as Assassin's Creed, Far Cry, The Division, Ghost Recon, Watch_Dogs, and Rabbids.

Tencent acquired its 5% in Ubisoft back in 2018, paying €66 per share at the time. Before the above news broke, Ubisoft shares were nearing €40, but they have leapt in value by as much as 21% but are now only about 11% up, after some will have made a quick (Euro) buck. One of the aspects of the Tencent investment rumors that would have excited investors, was chitter-chatter that the Chinese firm would be willing to pay up to €100 per share to strengthen its stake. If it still goes ahead, quick profit sellers might regret not being a bit more patient (no investment advice intended).
Looking at its current holdings (5%) plus its maximum potential purchase from the Guillemots (15%), Tencent could feasibly own 20% of Ubisoft in the near future. The Chinese firm isn’t going to limit itself to approaching the founders, though. It is also going to grab more shares from public shareholders, though the shares have fallen significantly from the 21% spike when this news broke. 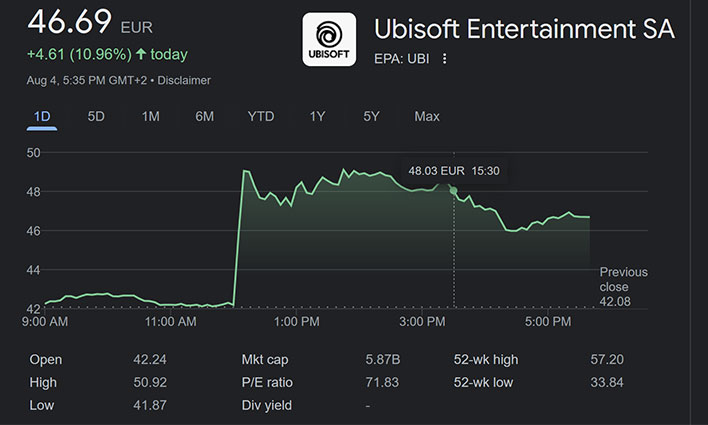 Reuters provides some background and reasoning for the huge investment by Tencent. It highlights the pressures on the domestic Chinese gaming industry, with Ubisoft seen as an avenue to sidestep such gaming politics. Meanwhile, it will be securing a great number of popular PC and console franchises and is transforming into a more global gaming brand. Reuters spoke to multiple sources with direct knowledge of the details regarding these background deals and negotiations.