In preparation for the arrival of Intel's upcoming Alder Lake CPUs and Z690 platform, TeamGroup is highlighting a couple of new DDR5 memory products, the T-Force Vulcan and T-Force Delta RGB. They are part of a larger online launch event, in which TeamGroup is unveiling a spate of products, including internal and external SSDs, and even a liquid-cooled SSD.
Of course, SSDs have been around for quite some time, but DDR5 memory has been out of the realm of consumer platforms up until this point. That changes this year with Alder Lake. Intel's 12th Gen Core processors and accompanying platforms offer up support for the next-gen memory standard, as well as DDR4 memory.
You won't be able to use both memory types in the same motherboard, but based on previous leaks, motherboard makers will have separate options for both DDR5 and DDR4 the moment Alder Lake arrives. That means users who to upgrade but are also interested in porting over their existing memory modules, will have the option to do so.
Time will tell what kind of performance gains DDR5 will deliver over DDR4, both in synthetic benchmarks and real-world applications.  Earlier this month, a leaked AIDA64 benchmark run highlighted a kit of DDR5-6400 RAM paired with a Core i5-12600K Alder Lake CPU, the former of which posted some impressive bandwidth figures. It came at the expense of latency, so we'll have to wait and see how that trade off plays out.
In the meantime, TeamGroup is ready to get the party started. The company is pitching its T-Force DDR5 lineup (pictured up top) as "gaming memory, which is offered in up to 64GB (2x32GB) at 5,200 MT/s. TeamGroup's kits also feature Intel XMP 3.0 profiles for one-click overclocking, and on-die Error Correcting Code (ECC), which is native to DDR5. 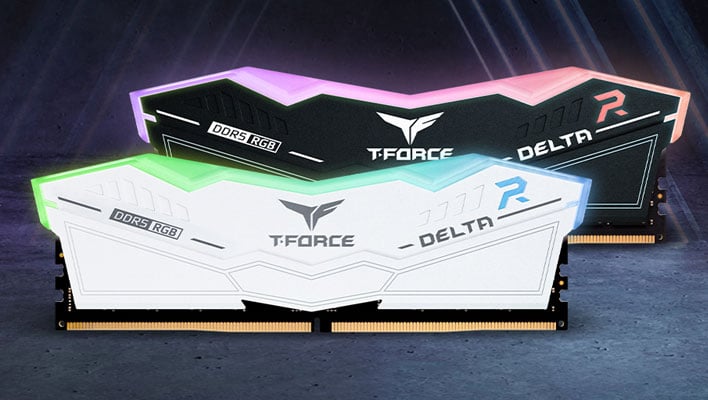 For those who want something flashier, TeamGroup's T-Force Delta RGB DDR5 kits are set to illuminate your PC with LED lighting across the top. TeamGroup says each RGB LED light can be programmed individually, for both color and speed.
These are also "gaming memory" modules, from a marketing standpoint. TeamGroup intends to make this lineup available in single 16GB and 32GB modules, and as part of 32GB (2x16GB) and 64GB (2x32GB) memory kits. Either way, the transfer rate checks in at 5,200 MT/s, which is a little above JEDEC's official specification (4,800 MT/s).
TeamGroup says these kits have been sent to major motherboard players (ASUS, ASRock, Biostar, Gigabyte, MSI, and unspecified others) for compatibility testing with each one's own custom lighting software. So they should play nice across a range of boards.
There's no word on how much these kits will cost, which will be interesting to see, especially with DDR4 memory pricing predicted to fall in the fourth quarter of this year.