The folks at TeamGroup just ripped out one of the fastest solid state drives on the market, based on the rated specifications. TeamGroup's new T-Force Cardea A440 Pro hitches a ride on the PCI Express 4.0 bus to deliver sequential read speeds of up to 7,400MB/s (or 7.4GB/s), and sequential write speeds of up to 7,000MB/s (7GB/s).
Drive makers are now flirting with saturating the PCIe Gen 4 bus. The Gen 4 specification supports around 2GB/s per lane, for a total of 32GB/s when utilizing all 16 lanes (x16). Today's high-speed SSDs in the M.2 form factor feature an NVMe x4 interface, so the theoretical upper limit is around 8GB/s (or 8,000MB/s). That's before any overhead, of course.

There's more at play than the bus width and supported speed alone. The main ingredients of an SSD are the memory chips and controller chip. While not mentioned, the A440 Pro almost features Phison's E18 controller, just like the regular Cardea A440 (read: non-Pro), perhaps with faster chips and/or more finely turned controller firmware.
TeamGroup did say it upgraded the chunky aluminum heatsink, for users who opt for that version. The aluminum fins are purportedly arranged in an "optimal structure for heat removal" with airflow and ventilation guiding the design. The upshot is that the SSD should, in theory, maintain faster data rates for longer periods of time, before throttling kicks in.

"The advanced dual heat dissipating combination of ventilation and increased surface cooling enables A440 Pro to be 48 percent cooler than other SSDs without additional cooling. It delays the occurrence of speed drop caused by high temperature generated during high-speed operations, breaking SSD performance barriers," TeamGroup says. 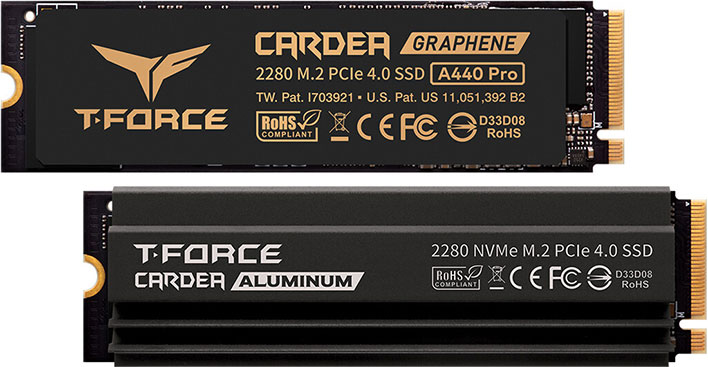 TeamGroup is also offering the Cardea A440 Pro with a much slimmer graphene heatsink, so it can fit in tighter spaces (like a laptop or if wanting to upgrade your PlayStation 5 with a fast SSD). Pricing shakes out like this...
So there's a $20 to $90 difference between the graphene and aluminum models, depending on the capacity. Both are offered in 1TB, 2TB, and 4TB models, and will be available in mid-to-late November.