When it comes to PCIe 4.0 SSDs, the sky is the limit with performance. When the first-generation SSDs landed with sequential read speeds surpassing 5,000 MB/sec, we were impressed. Things have only progressed from there, with SSDs using second-generation PCIe 4.0 controllers like the Adata XPG Gammix S70 delivering sequential reads/writes of 7,400 MB/sec and 6,400 MB/sec, respectively.

TeamGroup is now throwing its hat in the ring for PCIe 4.0 SSD performance dominance with the T-Force Cardea A440 SSD. The Cardea A440 trades a bit in maximum sequential read speeds compared to the Gammix S70 in favor of higher sequential writes, coming in at 7,000 MB/sec and 6,900 MB/sec, respectively. We should note that those figures are for the 2TB SKU; the 1TB SKU’s sequential reads/writes come in at 7,000 MB/sec and 5,500 MB/sec. When it comes to random writes, both the 1TB and 2TB SKUs are rated for 650K IOPS read and 700K IOPS write. 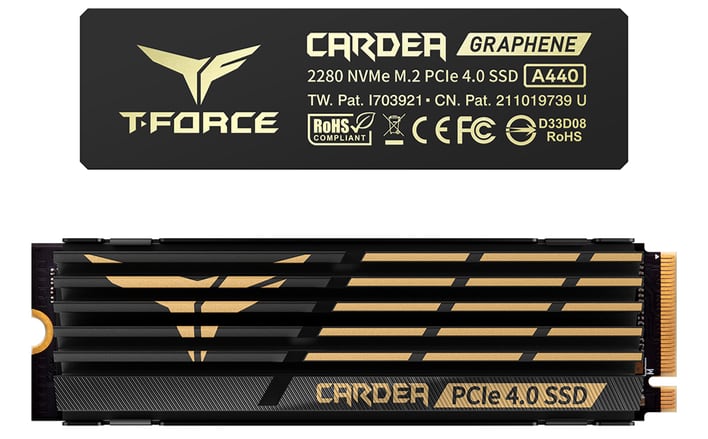 These high-performance SSDs can be known for running hot. TeamGroup tackles this head-on with ultra-thin graphene thermal modules to improve heat dissipation performance by 9 percent and beveled aluminum fins to further reduce SSD operating temperatures by another 15 percent.

T-Force is quoting a MTBF of 3 million hours for the Cardea A440, and it will come backed by a 5-year warranty. Pricing is competitive in this space, with the 1TB SKU coming in at $229 while the 2TB SKU hits $429. That pricing matches the suggested retail pricing of the Samsung 980 Pro and Western Digital Black SN850. However, we have the feeling that once the Cardea A440 hits the retail market, its price will fall quickly fall in line with its other PCIe 4.0 SSD competitors. Both the Samsung and Western Digital SSDs are regularly on sale at less than $200 for 1TB SKUs and less than $400 for 2TB SKUs.

According to TeamGroup, the Cardea A440 will go on sale globally next month.