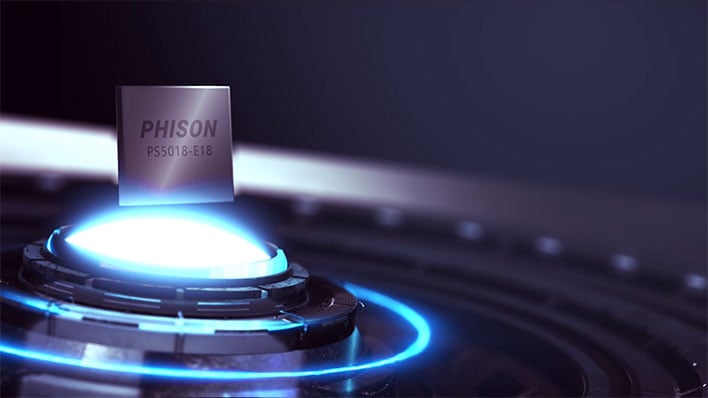 I have yet to see a solid state drive come with a whiplash warning, but maybe one is finally warranted. Faster SSDs are coming, and at least some of them will be driven by Phison's brand-spanking-new PS5018-E18 controller chip, which leverages the PCI Express 4.0 bus to push incredibly high read and write speeds on the PC.
How fast, you ask? According to Phison, the E18 controller can drive sequential read speeds of up to 7,400MB/s, or 7.4GB/s, and sequential write speeds of up to 7,000MB/s, or 7GB/s. This will enable a new generation of PCIe 4.0 SSDs that perform even higher than the initial ones, which generally peaked at around 5,000MB/s.
“While other companies are just now starting to release their first generation of PCIe Gen4 products, we have had a year-and-a-half lead with our ecosystem partner AMD. I am very excited that our next generation controller E18 will enable our partners to fully utilize the PCIe Gen 4x4 bandwidth and generate 7.4GB/s performance for their customers. We are proud to be leading the way in advancing this technology and we look forward to enhancing it in the years to come," says K.S Pua, CEO of Phison Electronics.

Phison said it designed the E18 from the ground up as a faster successor the E16, which itself was no slouch. It is based on TSMC's 12-nanometer manufacturing node featuring Phison's proprietary CoXProcessor 2.0 technology. According to Phison, the E18 is the only SSD controller currently available that can hit 7GB/s for both read and writes.
It is an 8-channel controller serving up 1,200MT/s per channel, and can support capacities up to 8TB. Of course, we don't even want to venture a guess as to what an 8TB SSD using the latest highs-speed SSD controller might cost (hint: it would be ultra-expensive). But you have to start somewhere.
SSDs in general have actually come down quite a bit in recent years. And for general purpose computing and even gaming, a comparatively slow SATA SSD with reads and writes of 'only' 580MB/s is still fast, compared to a mechanical hard disk drive (HDD). But these faster speeds could potentially benefit gaming in the not-so-distant future.
Both the Xbox Series X and PlayStation 5 are using high-speed PCIe 4 SSDs, with special storage architectures for developers to leverage. Microsoft calls this its Velocity Architecture, and it is already migrated to PCs with the recently introduced DirectStorage API for Windows. The hope is that faster SSDs will finally pay dividends in gaming as developers start to take the increased speed capabilities into account.