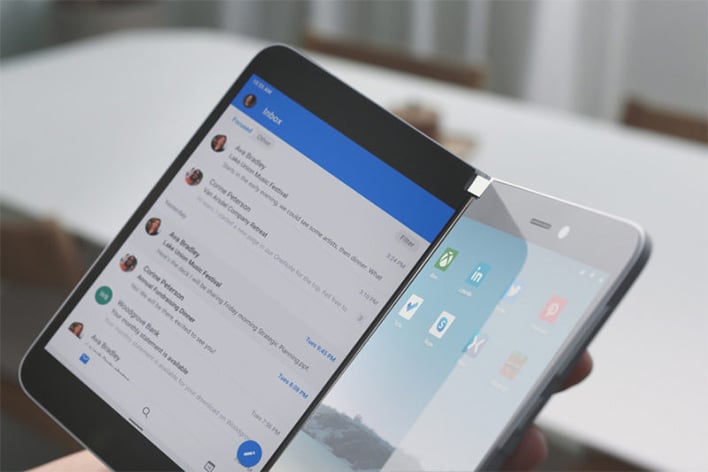 We have been saying for weeks now that Microsoft's Surface Duo launch is imminent, and we stand by that prediction. Adding to our confidence that it will be launching relatively soon, the dual-screen Android device recently made a cameo on the Federal Communications Commission's database, with nearly a dozen listings.
Most of the certifications were submitted in the first half of June, though a couple of them were submitted earlier this month. All 11 listings, however, were made available to view publicly on July 22 (this past Wednesday). Receiving clearance by the FCC is one of the final steps preceding a launch, which is expected to take place this holiday.
One of the documents lists the Surface Duo as a "phablet device," though another one of the listings goes into a bit more detail.
"Surface Duo is a new dual-screen device that fits in your pocket. With two screens connected by a revolutionary 360-degree hinge, Surface Duo brings together the best of Microsoft and Android to reimagine productivity on the go," Microsoft explains.
Unfortunately, the listings do not provide any confirmation on the specifications. That said, past leaks and rumors suggest the Surface Duo will debut with 2019-era hardware, including a Qualcomm Snapdragon 855 processor with 6GB of RAM, 64GB of internal storage (non-upgradeable), and a modestly capacious 3,460 mAh battery.
The star of the show, of course, is the dual-screen design. Microsoft's phablet sports a pair of 5.6-inch AMOLED displays, each with an 1800x1350 resolution.
Microsoft is in a bit of a race to beat Samsung's Galaxy Z Fold 2 to market. The Galaxy Z Fold 2 is tipped to be a higher end device, with a 7.7-inch 120H folding display and 6.23-inch cover display, powered by a Snapdragon 865+ processor, 12GB or 16GB of RAM, 256GB of onboard storage, and 5G connectivity.