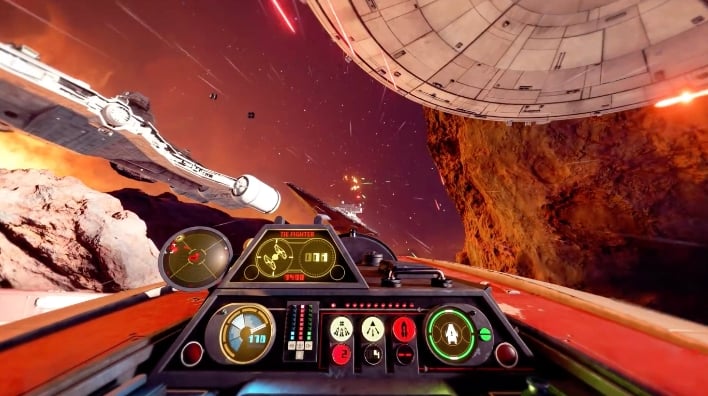 Star Wars fans have a new video game to look forward to from EA called Star Wars: Squadrons. Recently EA showed off a nearly 6-minute long gameplay video that gives a glimpse at the beautiful graphics and starfighter action that players can expect. The game is a first-person space dogfighting title that will allow players to fight as either an Imperial pilot or a Rebel pilot in a single-player campaign mode.

The Imperial pilot that players can choose is Case Kassandora, while the Rebel pilot is Rao Highmoon. Both of the pilots are customizable by the player, and there's also a multiplayer mode in the game. In the multiplayer mode, Squadrons offers 5v5 online fighting action with multiple game modes, including Fleet Battles that gives players tactical objectives along with the core dogfighting action.

Inside the spacecraft, players will monitor their fighters instrument panel for feedback on various vital statistics such as power levels, shields, weapon status, and others. Players will get to fly multiple ship classes, including the iconic X-Wing and TIE fighter, interceptors, support ships, and bombers. One fantastic piece of news, and quite a surprise for an EA game, is that there are no micro-transactions.

All ship upgrades and cosmetic items can be unlocked via gameplay. PC and PlayStation 4 gamers can also enjoy the game in virtual reality using a headset. The game also gets full joystick and HOTAS support. Star Wars: Squadrons will land on the PC, Xbox One, and PlayStation 4 on October 2 for $39.99.

That sounds like quite the bargain for what appears to be a very cool Star Wars game. PC gamers won't be locked to the EA Origin store. EA will launch the game simultaneously on Origin, Steam, and the Epic Games Store. If Star Wars fans need anything else to be excited about, cross-platform multiplayer is also enabled across all platforms. That means a PC gamer piloting an X-Wing can take out their friend on the PlayStation 4 flying a TIE Fighter.

We are super excited to get another Star Wars universe video game to enjoy. The last Star Wars gaming news we spoke of was in April when Stadia Pro announced that Star Wars: Fallen Order was coming soon.