Google has announced that its Stadia streaming service is adding 11 more games. Along with the new games also come new updates for Stadia Pro subscribers. One of the best things that Stadia Pro has announced for subscribers is that PUBG is now free. The Pioneer Edition that is free for Stadia Pro users will cost other users $39.99, while the base game priced at $29.99.

Along with PUBG, Stadia is also announcing an update with some new titles from EA coming to the service, including "Star Wars Jedi: Fallen Order" coming this fall, "Madden NFL" coming this winter, and "FIFA" coming this winter. New First on Stadia Games include "Crayta", which will be free for Stadia Pro this summer. 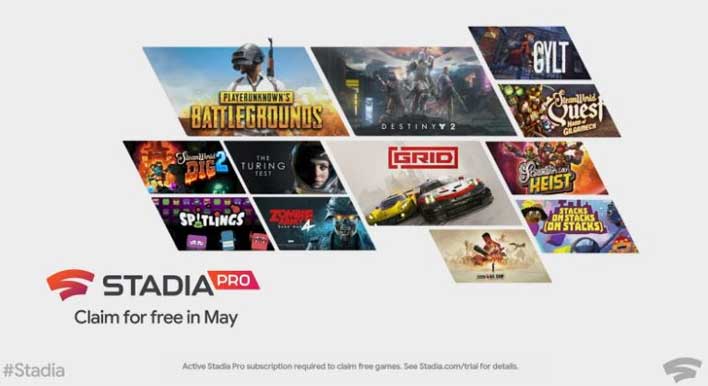 "Crayta" brings players of all ages, abilities, and backgrounds together to create a multiplayer game that can be shared with the world. Another game is "Get Packed" that will sell for $19.99 and lands today. That game is a co-op game "full of calamity and carnage" for 1-4 players online or in local play.

"Wave Break" is an arcade-style skateboarding game that is set in a crime-filled '80s Miami Vice world. Other games that are coming include "Embr" on May 21, which lets players become a first responder to fight fires and save lives. Other updates include "Zombie Army 4: Dead War", "The Turing Test", and "SteamWorld Heist" claimable on Stadia Pro on May 1. However, we've also learned that "Thumper" is leaving Stadia Pro at the end of April.

In other Google Stadia news, the free tier of the service launched earlier this month bringing something new to all the gamers around the world stuck home during the coronavirus pandemic.