Sony's PlayStation 5 has been available for about a month now, and quantities have been extremely limited, to say the least. Sony says the PS5 has been its largest console release ever and that absolutely every unit the company has made has been sold. However, so far the only way we've seen inside the console so far has been thanks to Sony's own pre-launch teardown. The cooling system is as big as the console itself -- which is to say, it's a monster -- but we haven't gotten a good look at the RDNA 2-infused chip inside until now.

The fine folks at iFixIt finally got their hands on one for a complete, thorough disassembly, and there's a lot to cover. In case you're unfamiliar with our previous look at the specs of the PS5, Sony's new console is based on an AMD semi-custom chip with eight Zen 2 CPU cores and an RDNA 2 GPU. The processor gets 16 GB of GDDR6 that provides 448 GB per second of bandwidth. As powerful as the system is, it doesn't quite match up to the Xbox Series X. The PS5 is also quite a bit more powerful than Microsoft's budget Xbox Series S console, too. 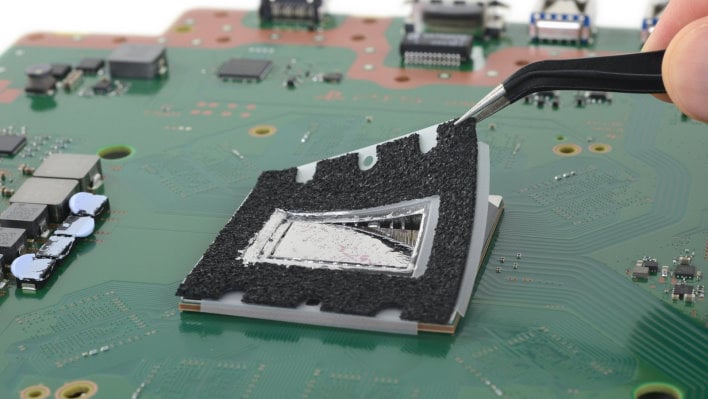 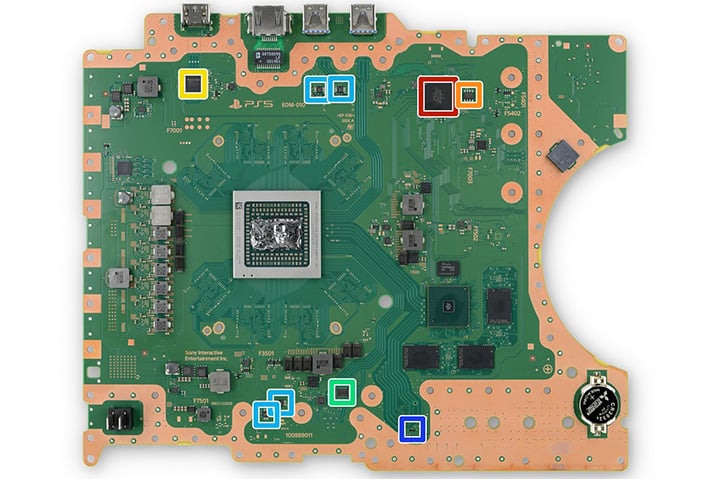 iFixit's PS5 teardown gets into the nitty-gritty, identifying all the various chips in the system. Fortunately, the M.2 slot for additional storage doesn't require fully tearing down the unit, and a second drive can be added by removing and replacing a single #0 Philips head screw. The same can be said for the fan, although it does apparently require a T8 Torx security driver to remove. After that, it's time to get intimate with the bare system board, but more security screws lead the way ahead. Fortunately, Torx security bits are easy enough to obtain on Amazon or from iFixit's own shop.

Of course, iFixit found AMD's enormous semi-custom chip, which is a bit tricky considering Sony used a liquid metal thermal transfer compound that the company talked about in its previous disassembly. The PS5's motherboard is incredibly condensed. One board includes not only the semi-custom chip and GDDR6 memory, but also Sony's custom SSD controller and the 825 GB of built-in storage. If the internal storage fails, it'll require a full motherboard replacement. As one might expect, Sony used one if its own Wi-Fi modules to provide wireless connectivity, and the antennas run throughout the console to provide as much speed and range as possible. 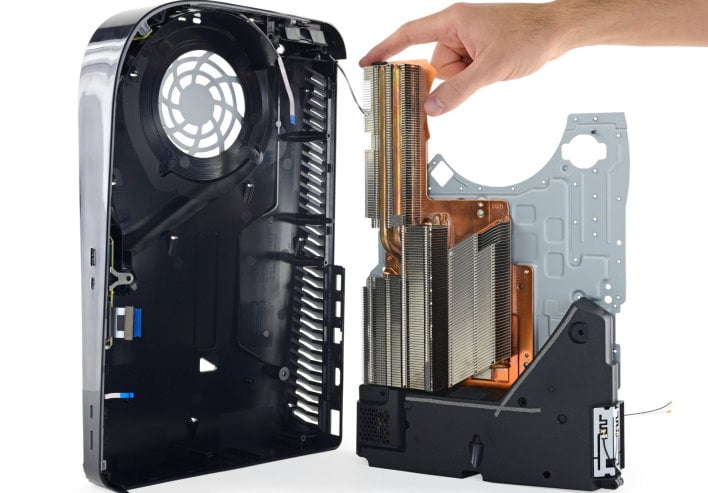 A huge heatsink covers almost the entirety of the motherboard, which is likely a requirement to keep fan noise from that huge blower from getting out of hand. The standard version of the PS5 has a UHD-capable Blu-ray drive. The PS5 Digital Edition skips the optical drive so the only way to get games on the console is by downloading them. Aside from a huge number of Torx security screws, iFixit didn't seem to need any special tools to get into the system. Overall, the PS5 received a repairability score of 7 out of 10, which is pretty good for consoles, when just a generation ago the external screws were covered with warranty-voiding anti-tamper seals.

While there are not many system exclusives right out of the gate, Marvel's Spider-Man: Miles Morales is one the company is betting on. The system also has wide backward compatibility with almost every PlayStation 4 game, and can run them in the PS4 Pro's Boost mode. The PlayStation 5 has been hard for just about everyone to get ahold of. Sony CEO Jim Ryan says that absolutely everything has been sold so far, and it seems like supply will be constrained into 2021, but patient gamers will ultimately be rewarded.