Building and tearing into a desktop PC is relatively easy, once you have done it a few times. Dedicated game consoles can be a little trickier, in part because of their compact nature, and proprietary design. Today's consoles are more like PCs than ever, though, so have things changed? You still probably should not gut a console unless you have a really good reason to, but that said, Sony posted an interesting teardown video of its upcoming PlayStation 5, and it does not look all that daunting.
Not that Sony is encouraging eventual PS5 owners to perform surgery on their shiny new consoles—I'm sure that would void the warranty. But kudos to Sony for giving us an up close and personal look at the PS5's insides, including the beefy cooling fan assembly, motherboard (with AMD's custom hardware in tow), storage expansion, and other parts.
Have a watch...

Most viewers seem to also appreciate what Sony has done. At the time of this writing, the official teardown video has in the neighborhood of 102,000 thumbs up, versus 1,900 thumb down votes.
"Our team values a well thought out, beautifully designed architecture. Inside the console is an internal structure looking neat and tidy, which means that there aren’t any unnecessary components and the design is efficient. As a result, we’re able to achieve our goal of creating a product with a high degree of perfection and quality," Sony says.

So, what does the cooling consist of in the PS5? Sony gets right to it, revealing a sizable, double-sided 120mm fan that is 45mm thick at the top early in the teardown. This allows the console to draw cool air into the system from both sides. 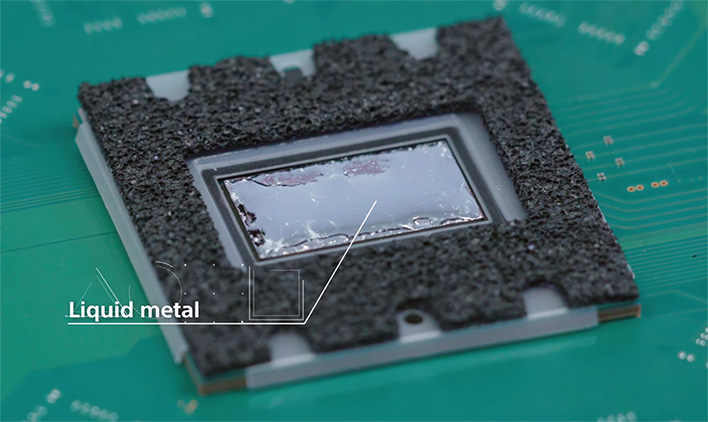 We also get a shot of a thick, vapor chamber heatsink deeper in the console, and perhaps most interesting, Sony shows off liquid metal applied to the custom system-on-chip.
Liquid metal is generally better than standard thermal paste. For those concerned about longevity, Sony says it "spent over two years preparing" and testing the PS5 for liquid metal "to ensure long-term, stable, high cooling performance." Cool stuff (literally).
The PS5 launches to retail on November 12. It costs $499 for the regular PS5 and $399 for the all-digital version.