We're used to seeing teardown of all the latest tech gadgets courtesy of iFixit with its high-resolution images and videos. Today, however, the teardown experts are giving us a look inside the original Sony PlayStation to commemorate its 25th birthday.

Unlike today's devices which are often riddled with proprietary screws, copious amounts of glue, and intricate designs that make them nearly impossible work on, the PlayStation is a relative joy to disassemble. In fact, getting inside the console is accomplished by using a trusty Philips screwdriver, after which the top plastic cover of the console can be lifted from its base. 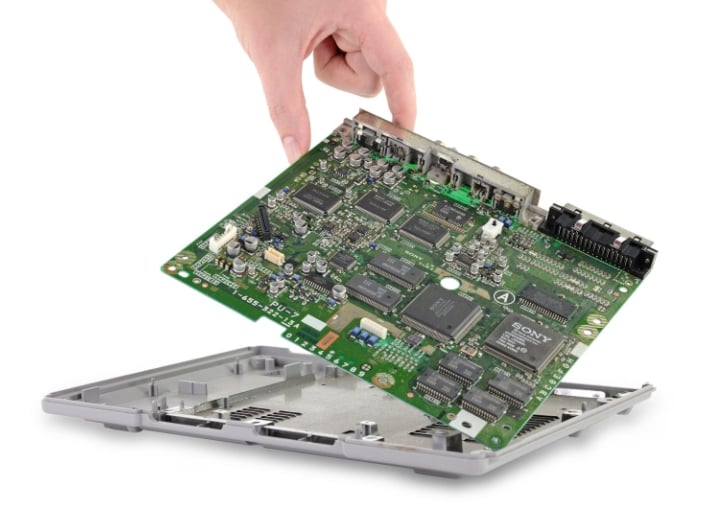 Inside, you'll find a rather large power supply unit, which iFixit reckons takes up around 20 percent of the total footprint of the console. Removing the power supply and optical drive assembly is a relatively easy affair, and both components are quickly replaced. Lurking beneath a heatshield is the rather large motherboard, which is home to a 33.8MHz R3000 processor, 2MB RAM, and 1MB VRAM.

Not surprisingly, the PlayStation achieved a respectable repairability score of 8 out of 10, with the main knock against its construction being that the I/O ports are soldered on the motherboard. So, if any of those ports fail, you're looking at a total motherboard replacement.

The original PlayStation's legacy still lives on, and last year Sony introduced the PlayStation Classic to cash in on gamer nostalgia (and similar interest from the Nintendo NES Classic and SNES Classic). However, sales of the mini console bombed -- in part due to the lackluster game lineup and poor performance -- and was relegated to the bargain bin shortly after launch.

The latest entry in the Sony PlayStation family -- the PlayStation 5 -- is rumored to launch on November 20th, 2020.