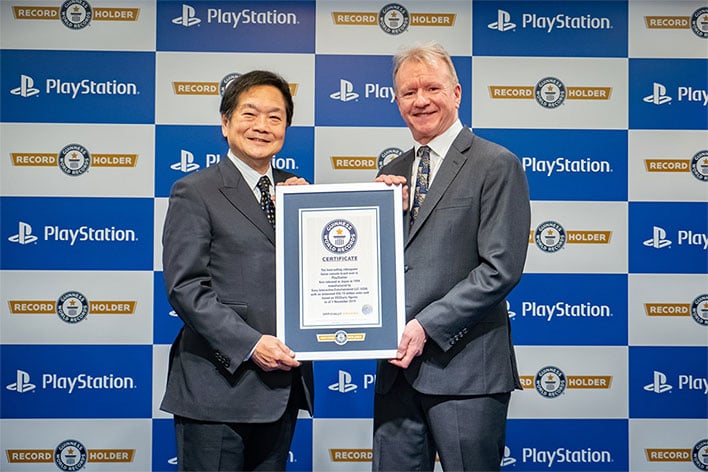 This should come as no surprise, but Sony and the evolution of its PlayStation console are in the records books—the Guinness World Records, that is. As Sony celebrates the 25th anniversary of its original PlayStation console, the Guinness World Records recognized the company for having the "best-selling home videogame console brand ever."
The achievements spans four main generations of PlayStation, including the original PlayStation, PlayStation 2, PlayStation 3, and PlayStation 4 (the latter of which is the second-best selling home console in history). And of course Sony has a history of peppering each generation of PlayStation will refreshed models, including slim designs and more powerful units, as is the case with the PlayStation 4 Pro.
"We're thrilled to be certified as the best-selling home video game console brand ever, with over 450 million units sold across the original PlayStation, PS2, PS3, and PS4 as of Nov. 7 according to @GWR . And it's all thanks to you 💙," Sony stated on Twitter.
Sony has been a stalwart in the home videogame market for many years, and for old fogies like me, the 25th anniversary of the original PlayStation (which came out when I was in high school) is a sobering reminder of how fast life goes by.
As for that original PlayStation system, Sony sold 100,000 units in Japan on its first day. After that, it went on to become the first console ever to jump past 100 million units sold around the world.
"We struck a chord with the gaming community because PlayStation offered experiences beyond what anyone could ever imagine was possible with a home console. From the very start, we opened our arms to developers, providing them with the tools and technology to create beautiful, expansive worlds, and to experiment with new ideas. That approach led to the diversity of games PlayStation is known for, a true hallmark for our brand across multiple generations of hardware platforms," Sony stated in a blog post.
Of course, it has not been all rainbows and ice cream. Sony has been known for sometimes stubbornly refusing to embrace cross-platform play at the same pace as Microsoft. That has been annoying, especially in the modern era of gaming where consoles and PCs have converged.
That aside, the PlayStation brand has certainly fostered gaming in the household. Gamers find themselves in a great place these days, between the PlayStation 4 Pro, Xbox One X, Nintendo Switch, and course the PC. And next year, Sony and Microsoft will launch their next-generation consoles, the PlayStation 5 and Project Scarlett, respectively.