Sony recently hosted a more in-depth specs reveal for its upcoming PlayStation 5 console, just as Microsoft did with its Xbox Series X, so we now have a better idea of the hardware and features that will make it tick. One question that still remained, however, is how extensive backwards compatibility would be on the PS4. We now have a better idea of that as well, and it's welcome news.
When Mark Cerny took to a faux stage in a setting that looked like a Mystery Science Theater 3000 shoot, he stated that Sony "recently took a look at the top 100 PS4 titles as ranked by play time, and we're expecting almost all of them to be playable at launch on PS5." He also noted there are "more than 4,000 games published on PS4" and said Sony would continue to testing to expand backwards compatibility as time goes on.
This where the confusion stemmed from, because 100 out of 4,000+ is a disappointingly small fraction—just around 2.5 percent, depending on the precise number of PS4 titles in existence. Sony has since clarified its plans in an updated blog post, noting that "the overwhelming majority of 4,000+ PS4 titles will be playable on PS5." 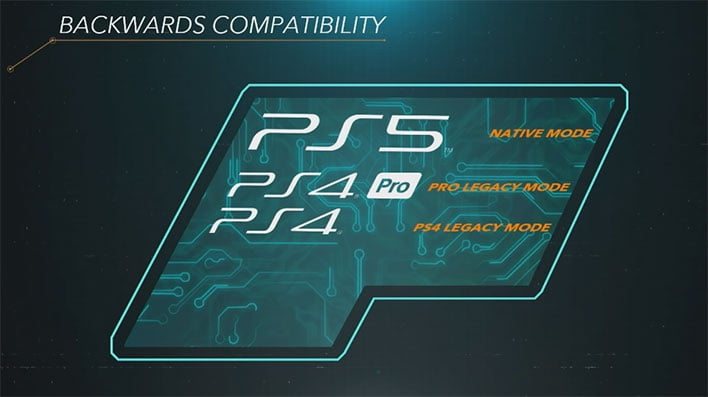 "In his presentation, Mark Cerny provided a snapshot into the top 100 most-played PS4 titles, demonstrating how well our backward compatibility efforts are going. We have already tested hundreds of titles and are preparing to test thousands more as we move toward launch. We will provide updates on backward compatibility, along with much more PS5 news, in the months ahead. Stay tuned!," Sony said.
There is still room for clarification, such as exactly how many PS4 titles will be playable on the PS5 at launch, and how what kind of time frame we are looking at for the promised majority of PS4 games to join the fray. However, at least we now know that practically every PS4 game will in fact be playable on the PS5 at some point.
Sony has several months to gets its PS4 ducks in a row. The PS5 will launch during "holiday 2020," which means sometime in November or December (eight or nine months from now). In addition to the number of titles that will be available, Sony offered up another interesting nugget.
"We’re expecting backward compatible titles will run at a boosted frequency on PS5 so that they can benefit from higher or more stable frame rates and potentially higher resolutions. We’re currently evaluating games on a title-by-title basis to spot any issues that need adjustment from the original software developers," Sony said.

The PS5 is powered by a custom AMD system-on-chip consisting of an 8-core/16-thread Zen 2 CPU clocked at up to 3.5GHz, paired with an RDNA 2-based GPU with 36 compute units clocked at up to 2.23GHz. The graphics hardware is not quite on par with the Xbox Series X (it's RDNA 2 chip has 52 CUs), but is still a significant upgrade over the PS4.