Sony was the first out of the gate to reveal details on its next-generation game console: the PlayStation 5. Sony first told us about the PlayStation 5 in April 2019 and confirmed that the console would be powered by an AMD Zen 2-based processor, Navi GPU, and that it would have an ultra-fast SSD for storage. It was later revealed that the DualShock 5 controller would support haptic feedback.

Today, however, Sony is giving us a true "deep dive" into the architecture of the PlayStation 5, much like how Microsoft has already done with its competing Xbox Series X. Not surprisingly, specs are very similar to that of the Xbox Series X with an 8-core/16-thread Zen 2 CPU that runs at up to 3.5GHz. Of course, 3.5GHz is the maximum boost clock, and the processor will likely run at lower speeds depending on the workload to save on power and to reduce fan speeds.

However, the PlayStation 5 is using a less powerful custom RDNA 2 GPU (operating at 2.23GHz), which features just 36 CUs compared to 52 CUs for the Xbox Series X. As a result, maximum compute performance comes in at 10.28 TFLOPs versus 12 TFLOPs for the Xbox Series X. A total of 16GB GDDR6 memory is installed using a 256-bit interface, bringing total memory bandwidth to 448GB/sec.

When it comes to those 3.5GHz and 2.23GHz clocks, Sony will be managing speeds based on the complexity of the game being played. "When that worst case game arrives, it will run at a lower clock speed. But not too much lower, to reduce power by 10 per cent it only takes a couple of percent reduction in frequency, so I'd expect any downclocking to be pretty minor," said Sony’s Mark Cerny speaking with Digital Foundry. "All things considered, the change to a variable frequency approach will show significant gains for PlayStation gamers." 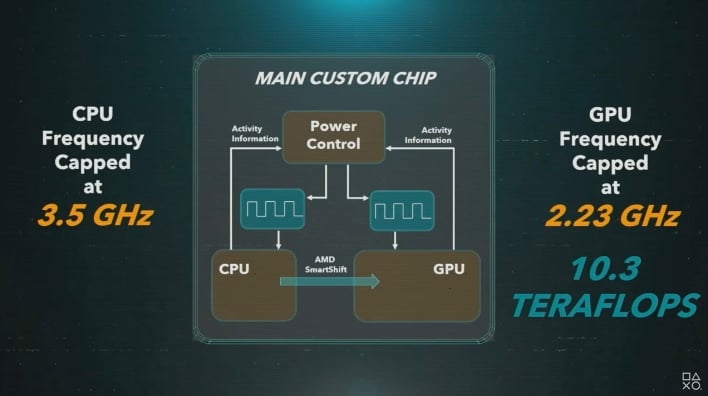 The PlayStation 5, on the other hand, will be able to accept off-the-shelf M.2 SSDs. But the SSD will have to meet certain specifications, including PCIe 4.0 compliance and read performance of at least 5.5GB/sec. Sony says that it will provide a full list of compatible SSDs when the PlayStation 5 launches. 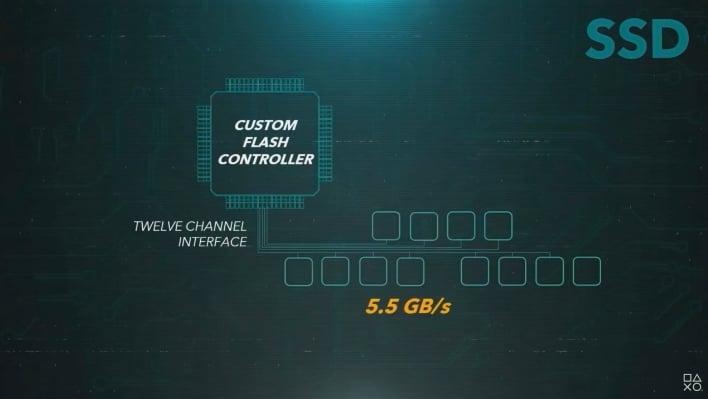 When it comes to storage subsystem performance, Cerny explained that while the PlayStation 4 was only capable of loading 1GB of data in about 20 second using its HDD, the PlayStation 5 can load 5GB of data in just one second. Cerny said that the inclusion of an SSD was the most frequently asked "upgrade" that developers wanted for the PlayStation 5. External USB hard drive are also supported (you can run your old, previous generation games from external storage).

One other aspect that Sony touched on today surrounds audio. Sony admits that the PlayStation 4 was a letdown with respect to audio compared to its predecessor: the PlayStation 3. However, with the PlayStation 4, Sony has developed what it calls the Tempest Engine which can support hundreds of high-quality sounds sources. 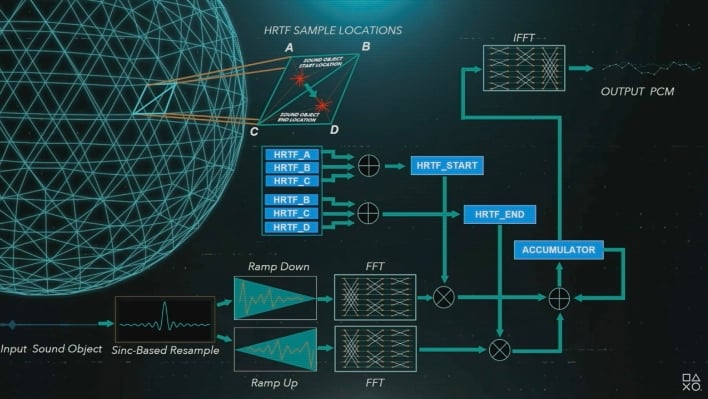 Sony in effect repurposed an AMD GPU unit (sans cache), allowing it to focus solely on DMA transfers. "Where we ended up is a unit with roughly the same SIMD power and bandwidth as all eight Jaguar cores in the PS4 combined," Cerny added. "If we were to use the same algorithms as PSVR, that's enough for something like five thousand sound sources - but of course we want to use more complex algorithms, and we don't need anything like that number of sounds."

What does that mean in layman's terms? Well, expect a much more immersive audio experience with the PlayStation 5 compared to the current PlayStation 4.

Unfortunately, that's about all that Sony had on tap for us today. We didn't learn anymore about the DualShock 5 controller, and we didn't even get a shadowy glimpse at the console itself. We also don't know if Sony remains committed to its Holiday 2020 launch window in the face of the coronavirus outbreak. All of those details will likely have to wait for another event down the road...