Like it or not, eBay is the go-to dumping ground for items that are in high demand and extremely difficult to obtain, like the latest generation graphics cards and game consoles. Go ahead and add Microsoft's Xbox Series X Mini Fridge to the list as well. It's not even out yet, but after pre-order sales came and went in the blink of an eye, scalpers who managed to secure one are now hawking their score on the auction site...at more than triple the price.
They are attempting to, anyway. Some of the current listings are asking for north of $300, compared to the $99 pre-order price the sellers paid for what amounts to one of this holiday season's subjectively coolest items. Unlike the mini fridge itself, scalpers simply have no chill. The highest asking price I've seen so far is $450, plus another $20 for shipping. 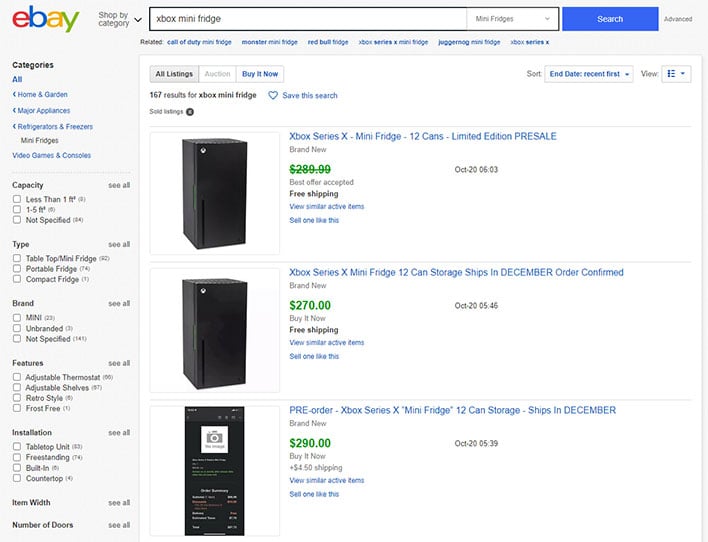 A better gauge of this sort of thing is to look at recently sold listings, as opposed to ones that have not yet found a buyer. For the most part, the Xbox Series X Mini Fridge is fetching between $250 and $300. Buyers are apparently gambling that they won't be able to score one at retail when these units release in December, and anticipating even higher auction pricing in a couple of months.
The Xbox Series X Mini Fridge went up for pre-order yesterday at Target in the US. Microsoft and Target gave a heads up beforehand, but didn't say what time pre-orders would open. I imagine some people stayed up all night (starting at midnight) hitting the refresh button. Orders actually opened up around 9:30 am ET, and sold out by 9:29 am ET (yes, I wrote what I wrote). It felt that way, anyway. On my end, the page switched from 'coming soon' to 'sold out' instantly. 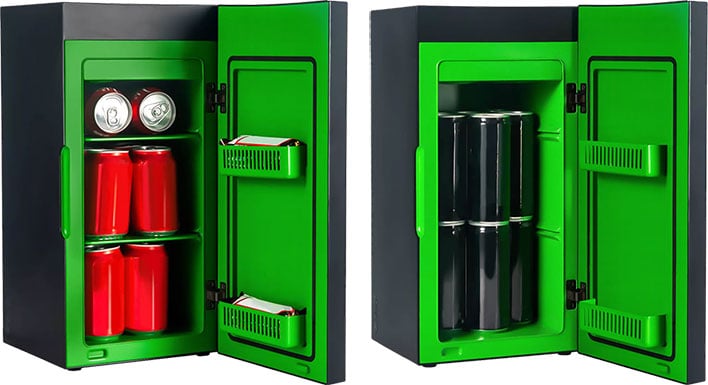 Hey, at least this became a real item in the first place. It started out as a meme, but interest was high enough that Microsoft's Xbox division ultimately turned it into a real product. It's big enough to fit an actual Xbox Series X inside, though don't throw one in there. More practically, it holds up to 10 soda cans (Target's product page incorrectly states 12), and also has a couple of shelves on the door for snacks.
According to the specs, the fridge can cool items to 36F (20C) below ambient temperature. There's also a 5V 2.1A USB port on the front to charge your controller or smartphone. And yes, both the logo on the front and the top of the fridge light up, each with its own on/of switch.
If you're interested in the themed mini fridge and don't want to pay scalper pricing, you'll have another shot in December, when these land on store shelves.