Start penning your letter to Santa now, because I have little doubt that one of this holiday season's hottest items will be a miniature fridge that looks like an Xbox Series X game console. Yes, the aptly named Xbox Mini Fridge is a real item (I checked the date and we're far removed from April Fool's Day), and I am undoubtedly not alone in wanting one.
How did this come to be? Around a year ago Microsoft gifted a full-size fridge to iconic rapper Snoop Dogg for his birthday, who posted a video of the awesome appliance to Twitter. Microsoft also gave one to i.Justine, a tech YouTuber and influencer. Not surprisingly, the novelty fridge received a ton of attention, and now a mini version is being made for the masses.
Have a look...
When the Xbox Series X was first revealed, the new look (compared to flatter, squarish and rectangular consoles of old) drew comparisons to a small refrigerator. Microsoft leaned into the meme, and when Twitter ran a poll asking for users to vote on which deserves to be the first-ever #BestofTweets brand bracket champion, Skittles or Xbox, Microsoft's Aaron Greenberg promised that if Xbox won, the company would make an actual Xbox Mini Fridge. 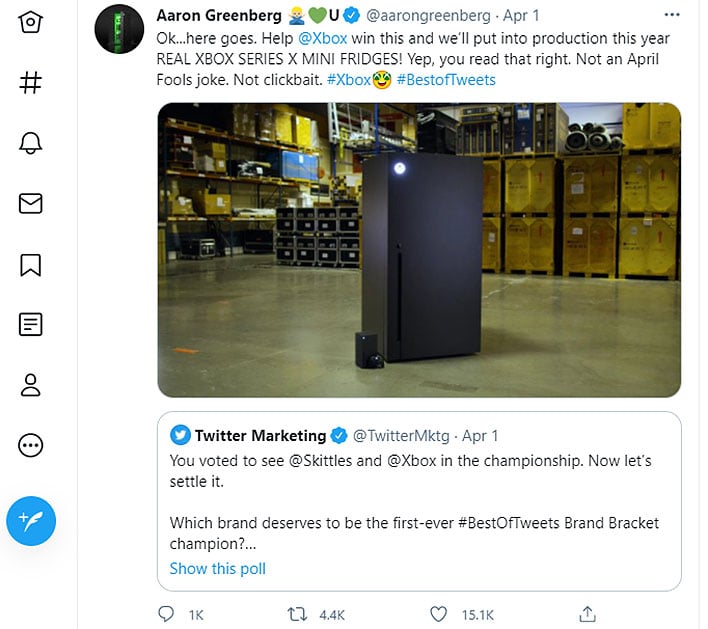 Though the message was posted on April 1, Greenberg insisted it was "not an April Fool's joke" and "not clickbait." He was telling the truth. Xbox squeaked out a victory with 50.5 percent of the votes, and now Microsoft is making good on Greenberg's promise.
Microsoft claims the Xbox Mini Fridge will be "the world's most powerful mini fridge" with an "Xbox Velocity cooling architecture" to keep all those canned beverages nice and chilly (a play on the console's Velocity architecture for hyper-fast I/O performance). Whether it actually will be the most powerful remains to be seen, but it will definitely be one of the coolest, in terms of aesthetics and geek appeal. 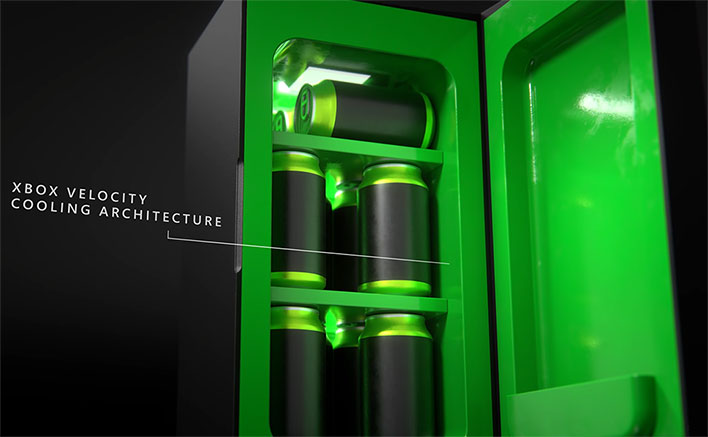 Beyond the fun Microsoft is having with its marketing, there is not much information about the upcoming fridge, like its dimensions and weight, soda/beer can capacity, true cooling ability, or cost. From what we can tell by the teaser video, though, it looks like it can hold at least 10 12-ounce cans in the main section, and perhaps a few more in the door's compartment (maybe four more, if stacked on top of one another).
While there is no precise release date, Microsoft is inviting users to "Xbox and chill" in holiday 2021, so it will likely be available in November or December.