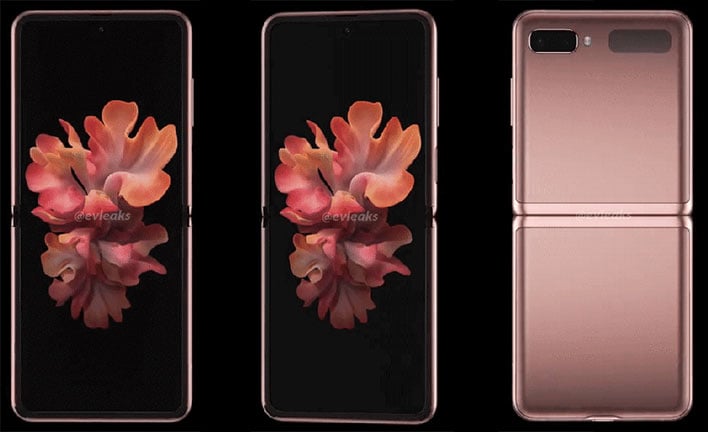 If there was any question about what Samsung's upcoming Galaxy Z Flip 5G smartphone will end up looking like, a set of leaked renders should put the matter to rest—the phone will look identical to the regular Galaxy Z Flip, just in at least one different color option. Notably, it looks like the 5G variant will come in a "Mystic Bronze" color scheme (and probably some other colors as well).
Flip phones were all the rage when cellular devices were relatively new, but waned in popularity when smartphones arrived on the scene. Modern versions attempt to offer the best of both worlds—a smartphone screen and experience in a flip-phone form factor.
As such, Samsung earlier this year launched the Galaxy Z Flip. Unlike the Galaxy Fold, the Galaxy Z Flip sports a more traditional clamshell design that lacks a sizable external display when shut (it does have a small 1.06-inch color OLED screen for displaying notifications). When opened, it reveals a flexible 6.7-inch Infinity-O display with a 2636x1080 resolution, According to Samsung, it can open and close 200,000 times before failing.
A 5G version of the Galaxy Flip Z is in the works. And thanks to prominent leaker Evan Blass, we now have some official looking press renders to look at, courtesy of his Patreon page. By way of an animated GIF, we can see a 360-degree view of the upcoming handset, in the Mystic Bronze color scheme. Have a look...

It looks the same, other than the color. As for the hardware, it is expected to arrive with a Qualcomm Snapdragon 865 processor with a 5G radio, along with 8GB of RAM and 256GB of internal storage. It looks like the camera arrangement will be the same, consisting of a 10-megapixel front shooter for taking selfies, and dual 12-megapixel rear cameras (wide and ultrawide lenses).
Samsung is expected to announce the Galaxy Z Flip 5G alongside its upcoming Galaxy Note 20 series on August 5, follow by retail availability on August 20.