We've seen plenty of leaks over the past few weeks and months concerning Intel's 11th generation Tiger Lake-H processors and NVIDIA's [thus unannounced] GeForce RTX 3050 GPUs. Today, however, Samsung just put it all out in the open with the announcement of its Galaxy Book and Galaxy Book Odyssey gaming laptops.

The standard Galaxy Book features a 15.6-inch FHD display and is available with a variety of processors to cater to a wide range of gamers. At the low end, Samsung makes available Intel Celeron or Pentium Gold processors. However, those with a bit more money to spend can opt for 11th generation Core i3, Core i5, or Core i7 Tiger Lake processors. Base configurations are equipped with 4GB of LPDDR4x memory, while flagship systems max out at 16GB.

Base systems make do with integrated Intel graphics (UHD Graphics on Celeron/Pentium/Core i3 systems, Iris Xe on Core i5/Core i7 systems). At the same time, there is also an option for a discrete GeForce MX450 for those that want a bit more graphics muscle for light gaming. Other features include up to a 1TB SSD, a 54 WHr battery (bundled with a 65-watt fast charger), a fingerprint reader embedded in the power button, dual USB-C ports, dual USB 3.2 ports, HDMI, and a microSD slot.

The system that really caught our eyes, however, is the Galaxy Book Odyssey. This system uses the yet-to-be-launched 11th generation Tiger Lake-H processors available in up to 8-core/16-thread configurations. Another interesting addition is your choice of a GeForce RTX 3050 or GeForce RTX 3050 Ti discrete GPU. NVIDIA has yet to announce either GPU, but we've seen leaks from the likes of ASUS and Lenovo. 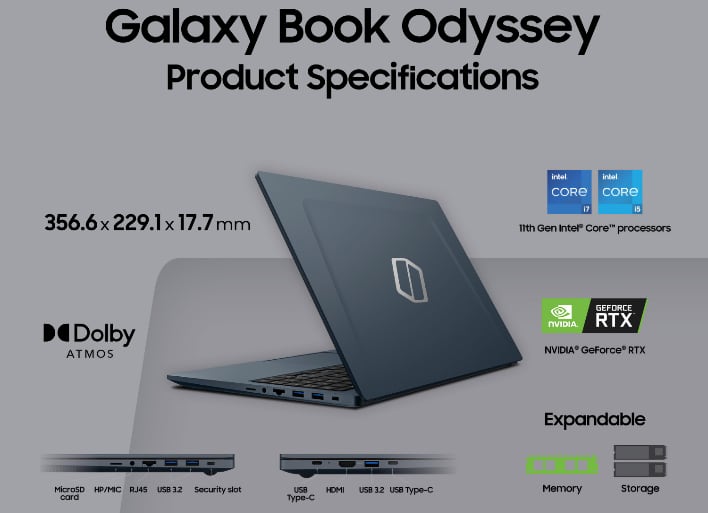 According to Samsung, the Galaxy Book officially goes on sale on May 14th, priced from $549. However, the Galaxy Book Odyssey isn't expected to launch until August, with a starting price of $1,399.