So far, NVIDIA has released just three mobile Ampere GPUs for laptops, those being the GeForce RTX 3080, GeForce RTX 3070, and GeForce RTX 3060. Within each of those main tiers, OEMs have a million and one combinations to work with (rough estimate), leading to a dizzying array of GeForce RTX 30 mobile GPU configs. Even still, NVIDIA is not finished fleshing out its mobile lineup, and a recent leak highlights what to expect from the upcoming GeForce RTX 3050 Ti and GeForce RTX 3050 additions.
Before we get into the unannounced parts, let's quickly recap the specifications for NVIDIA's current lineup. Here's a look... 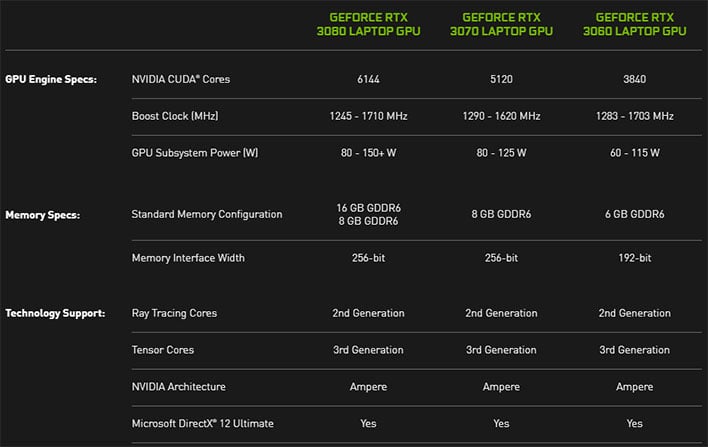 The above chart gives a general overview of the different configurations available to OEMs, in terms of clock speeds and power envelopes (higher clocks require more power, obviously). We also see the variances in CUDA counts, memory, and memory bus widths. And all of these are equipped with dedicated hardware for real-time ray tracing.
So far we have only spent hands-on time with one of these mobile GPU configurations, the GeForce RTX 3070, which you can check out in our Alienware m15 R4 review. In short, it offered up exceptional gaming performance, albeit in a pricey package (the model Dell sent us was decked out with several upgrades, like a 4K OLED display).

The GeForce RTX 3050 Ti and GeForce RTX 3050 will undoubtedly slip into more budget-friendly gaming laptops. Regarding their specifications, the folks at Notebookcheck say they have the skinny on the upcoming SKUs, courtesy of unnamed sources that shared several notable details. So, what are we looking at?
Assuming the site's leaked information is correct, the GeForce RTX 3050 Ti will splash the budget laptop scene with 2,560 CUDA cores and 4GB of GDDR6 memory tied to a 128-bit memory bus. That will give it 88GB/s of memory bandwidth.
Same as with the existing lineup, the upcoming part will have a TGP range OEMs can work with, and specifically 80W down to 35W. Here are some possible combinations of power configs and accompanying boost frequencies...
As always, it will be important to check the detailed specifications of any gaming laptop before committing to a purchase, given the wide range of possible performance. All in all, though, the GeForce RTX 3050 Ti looks to be an intriguing addition to NVIDIA's lineup.
Looking at the regular GeForce RTX 3050 (non-Ti variant), it is said to feature 2,048 CUDA cores, with the same memory arrangement as the Ti model. And of course clocks will depend on the power target that OEMs choose to roll with in their laptop designs. Here are some possible combinations...
The clock speeds are a little faster across the board, though not anywhere near enough to offset the fewer CUDA cores. That's okay, though, because this should enable even cheaper gaming laptops, still with support for real-time ray tracing.
What will this translate to, in terms of actual performance? The anonymous sources shared some information in that regard as well... 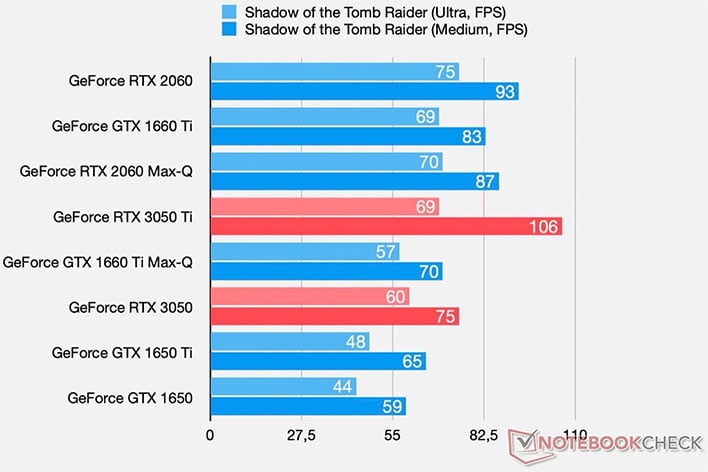 The GeForce RTX 3050 Ti impressively outpaces the GeForce RTX 2060 in Tomb Raider, hitting triple-digit frame rates at the Medium quality setting. At the Ultra quality setting, it remains competitive, posting 69 frames per second, according to the leaked data.
Meanwhile, the regular GeForce RTX 3050 supposedly zips ahead of the GeForce GTX 1650 Ti, and is just a little bit slower than a GeForce RTX 2060 Max-Q. At both Ultra and Medium settings, it manages to hit the desirable 60 frames per second mark.
Naturally we have to wait until these parts actually exist to know for sure how they perform. That said, this leak is encouraging, especially if these upcoming GPUs end up in affordably priced gaming laptops in the $600-$800 range.