An unreleased Samsung laptop has found its way to Geekbench, though that alone is not the interesting part. What is interesting, however, is the hardware inside. The unreleased laptop is sporting an Intel Core i5-11400H processor paired up with an NVIDIA GeForce RTX 3050 graphics chip. Neither of those parts officially exist (yet).
Let's start with the CPU. According to the benchmark listing, the 11th Gen Core i5-11400H is a 6-core/12-thread processor with a 2.7GHz base clock and 4.5GHz turbo frequency. It also features 12MB of L3 cache, and of course is based on Intel's Tiger Lake architecture. It is expected to arrive around the middle of this year when Intel launches its Tiger Lake H45 lineup.
Here's how it performed in Geekbench 5... 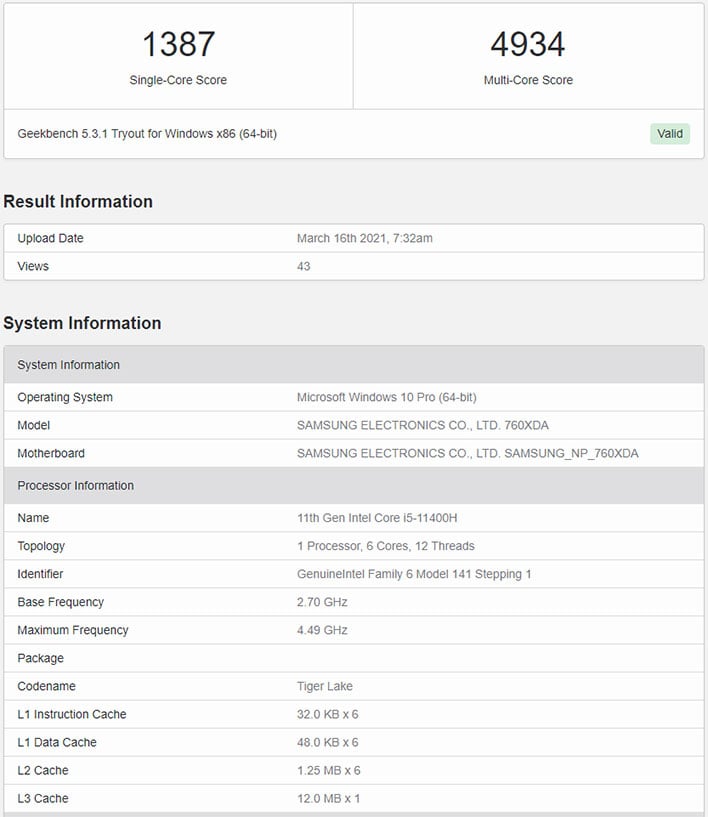 It posted a single-core score of 1,387 and a multi-core score of 4,934. We are typically more interested in the former, as it gives us a snapshot of the architecture's prowess without having to account for how good (or not so good) a benchmark might be at tapping into additional cores and resources.
To that end, here is a collection of average scores on Geekbench 5 for the single-core benchmark runs...
For whatever reason, Geekbench doesn't lump the soon-to-be previous generation Core i5-10400H into its roundup of average scores.  Looking up individual listings, however, shows it typically scores around 1,240 in the single-score test. The leaked Core i5-11400H scored nearly 12 percent higher—not bad.
Moving onto the graphics, NVIDIA has not yet announced a GeForce RTX 3050 GPU (desktop or mobile), but it is undoubtedly coming. As to how it will perform, here's how it did in Geekbench... 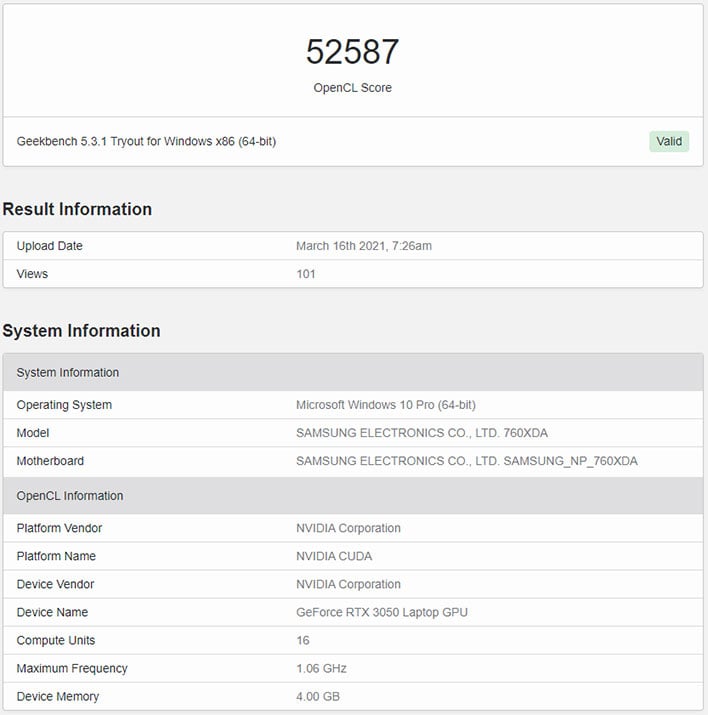 It posted an OpenCL score of 52,587. By itself, that score does not mean much, but just as before, we can compare it against Geekbench's collection of average results. Here's a look...
Once again, not too shabby. Based on these figures alone, the GeForce RTX 3050 in mobile form is faster than a desktop GeForce GTX 1070 Ti. Whether it truly works out that way remains to be seen, but these figures are certainly enticing.
According the listing, the GeForce RTX 3050 sports 16 compute units, which works out to 2,048 CUDA cores (128 CUDA cores per CU). It also features 4GB of presumably GDDR6 memory. Based on the leaked specifications and performance data, it should be an interesting part for budget gaming laptops.